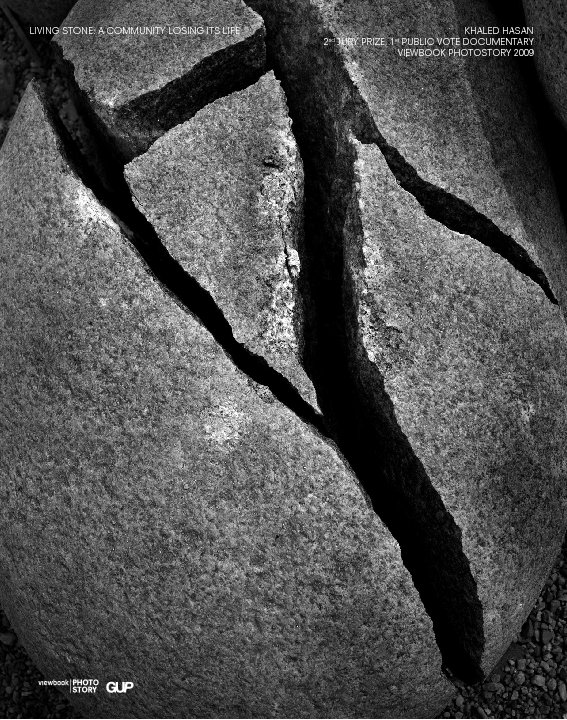 Photographer Khaled Hasan's compelling series of black and white photographs documents and emphasises the paradox in the dramatic struggle for survival of the eroded Piyain River and a poor stone-crushing community in northern Bangladesh. Khaled Hasan challenges us with this incredible set of well-composed images, he holds up a mirror. Instead of passing judgement he wants us to reflect on and question our own environmental behaviour.

Khaled Hasan’s photos have all the elements of a good photo. They have beautiful composition and contrast, but above all content and meaning. Now and then he adapts his style to grab our attention, but in a subsequent photo he immediately returns to the content. The bed of a river in the northeast of Bangladesh is completely removed by an impoverished community; ancient black rocks, rubbed smooth by the water. The photos show the people slogging, sweating, fighting to survive. Less than ten years ago you would have said, ‘Oh, those poor people’, but times have changed. The polar ice caps are melting and greenhouse gases are destroying our ozone layer. In 2009, anyone looking at these photos feels sympathy for the river, for Mother Earth. Stripped bare, the Piyain River lies meekly by. Defenceless and scarred for life. What must once have been a pretty riverbed, full of big round rocks, lined with trees and bushes, has now become a wasteland. The channel that leads the water to the sea has disappeared. At the first monsoon rains the water will run in all directions, as if Bangladesh has been hit by another flood. What will the water soon carry along with it? And where do all those crushed rocks go? Who uses them and what for? What at first appears to be a far-off problem comes so horribly close by. Why does Khaled Hassan see a problem to which we are blind?

The way in which the world functions is unjust; there is structurally unfair opposition. The world spends 50 billion a year on development aid, but spends 1,000 billion a year on arms and easily 7 trillion dollar was spent to control the financial crisis. If things were distributed fairly, this community in Bangladesh would have a normal life. And they would not be forced to plunder the Piyain River day in and day out. Perhaps we don’t need these rocks to live a good life. In the meantime, Mother Earth is turning her back on us and we are unwilling to look at the consequences of our behaviour. We don’t want to recognise that we are unnecessarily allowing a community in northern Bangladesh to live in poverty and we don’t want to recognise that our behaviour is destroying the Earth. We should be thankful that Khaled Hasan did want to look. With his photography he confronts us with ourselves. His photo of the large rock, irrevocably smashed to pieces with a sledge hammer, describes in great detail our own tragedy.

Viewbook.com is a new online service that enables photographers to present, deliver and promote their photographs with uncompromising flexibility and quality. With a comprehensive image manager it’s possible to create clean image galleries, portfolio’s and portfolio websites on a personal domain, in just a few clicks. Viewbook’s features also extend to presentation creation and client delivery, as well as online image archive and flexible presentation formats. In short, Viewbook offers accelerated workflow to photographers, and over 20,000 users can attest to its appeal. www.viewbook.com