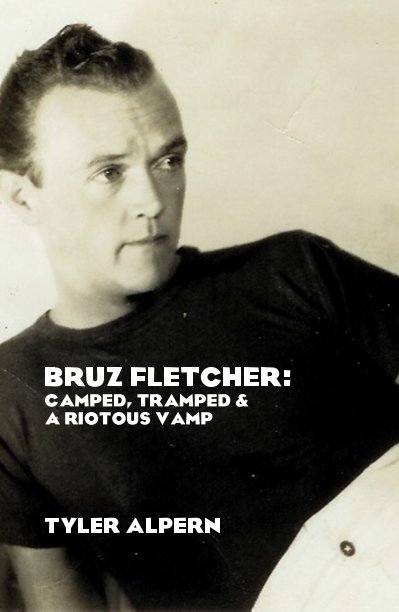 Study of a Gay Artist in the 30s

True story of the multi talented writer, photographer, composer, performer Bruz Fletcher, born to one of the wealthiest and most dysfunctional families in Indiana, twice took the difficult journey of riches to rags in his short, turbulent 34 years. His drama filled life was an ever changing saga, a wild and sad story of extremes and incredible plot twists. For a while, Bruz overcame it all and sparkled as he entertained nightly in glamourous nightclubs, delighting his often well-known patrons with his electric, quick witted, sophisticated and risqué songs.   An out and bold pioneer, Fletcher and his partner Casey Roberts lived together openly in home after home, in state after state, hosting salons and publicly collaborated on numerous artistic endeavors ranging from the theatrical, to literary, to the decorative and fine arts. Few such open, prominent and well documented gay couples existed in that era.


Though he killed himself in 1941, he left behind three albums of wonderful songs and two novels that give some colorful and candid glimpses into his own world populated by society dowagers, misfits, celebrities, addicts, servants, lovers and eccentrics that covered a wide variety sexualities and mores. Bruz was an early feminist of sorts creating a myriad of bold, powerful, smart, independent, female characters who were often sexual outsiders. Bruz even created a joyful transgender character in a hostile climate before such people were a people were a part of mainstream consciousness or imagination.


Living as openly as a gay man could, he became a master of gay code and double speak in order to survive and flourish in a very homophobic era.

Much like Jay Little, or Samuel Steward, Bruz Fletcher is one of the few rare and forgotten pre-Stonewall gay artists whose story has recently come to light. The flavor, language and culture of gay life in the 30's is preserved in the lyrics and letters included in the book.