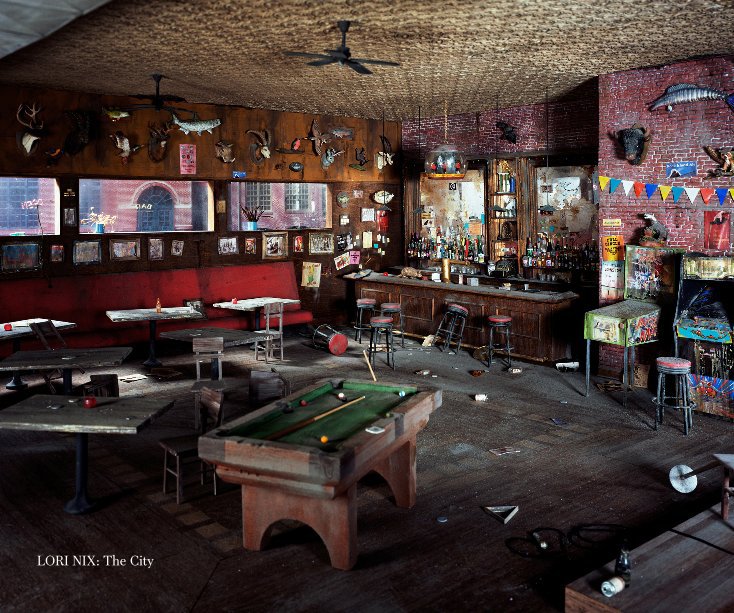 Lori Nix was born and raised in western Kansas, in an area known for its tornados, snow storms, droughts and infestations. As a child, she viewed these natural disasters as entertainment, relieving her of her otherwise ordinary reality. Brush fires and fallen trees became her playground and influenced her first body of work, Accidentally Kansas, for which she garnered much acclaim.

Her newest series, The City, is still greatly influenced by her youth. Apocalyptic in nature, this series imagines a world without people. As she states:

…(in) The City, I have imagined a city of our future, where something either natural or as the result of mankind, has emptied the city of its human inhabitants. Art museums, Broadway theaters, laundromats and bars no longer function. The walls are deteriorating, the ceilings are falling in, the structures barely stand, and yet Mother Nature is slowly taking them over. These spaces are filled with flora, fauna and insects, reclaiming what was theirs before man’s encroachment...I am afraid of what the future holds if we do not change our ways regarding the climate, but at the same time I am fascinated by what a changing world can bring.

Working in her home/studio, Nix combines cardboard, foam, glue and paint to construct small dioramas which she then photographs with an 8 x 10” camera. Often taking up to seven months to complete, these large scale photographs of everyday places – a laundromat, bar, library, aquarium – fall victim to decay, referencing the effects of man. Using humor as her anchor, Nix’s work challenges our perceptions of reality, as she reminds us of our responsibilities.

Lori Nix has received many honors including a 2010 & 2004 New York Foundation for the Arts Individual Artist Grant. Her work has been exhibited throughout the country and is in the collection of the Museum of Fine Arts (Houston), The International Museum of Photography at George Eastman House (Rochester, NY) and the Smithsonian American Art Museum, Washington, DC, among others.