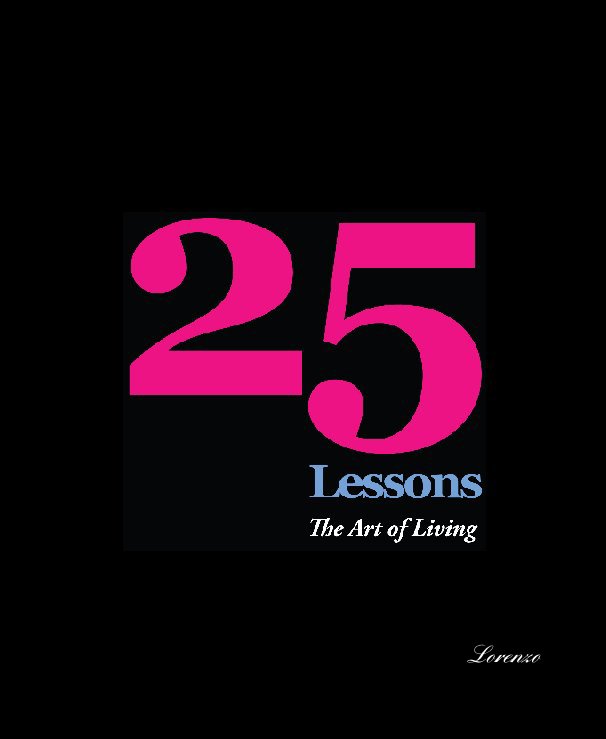 The Art of Living

Husband, father, and corporate employee— Lorenzo's life revolved around home, work, and his daily commute from the suburbs to the city.

Then, one day in the Spring of 2005, he found himself staying at The Little Church in midtown Manhattan in the wake of a marital separation. Living in virtual isolation for three months, he had a rare chance to re-examine his life.

Quite unexpectedly, he found himself wandering around the city to take photographs, a passion he had let slide in the years of pursuing a career and starting a family. During his nightly sojourns through the streets of New York City, he was reminded of some important life lessons—lessons too easily forgotten in the blur of everyday existence.

Now one of the premier up-and-coming photographers on the streets of New York City, 25 Lessons: The Art of Living chronicles Lorenzo’s journey into the amazing world of digital photography and how it helped him to reconnect with the world around him, and to live a life that is truer to one’s self.

In this unique book, which bridges word with image, he describes how the deceptively simple rules of photography can also be applied to the art of living. Inspirational and poetic, this book will not only spark readers’ creative energies, but also reawaken their passion for life.

25 Lessons: The Art of Living is slated to be a worldwide best seller. Speaking through the universal visual medium of photography, 25 Lessons tells Lorenzo’s inspiring story with over 500 different photographs. The book itself has over 60 testimonials praising Lorenzo’s remarkable work from fellow photographers in over 12 countries including Argentina, Australia, Belgium, Brazil, Canada, France, Germany, Ghana, Ireland, Italy, Japan, Malaysia, the Philippines, Qatar, Spain, the United Arab Emirates, and the United Kingdom. The publisher, Blurb, now transacts in over 57 countries. And the website for the book, (www.25Lessons.com) is translated into 10 languages including: English, Spanish, French, Italian, Portuguese, German, Dutch, Russian, Chinese and Japanese.

Lorenzo is a graduate of the World Arts & Culture program at the University of California at Los Angeles, as well as the graduate School of International and Public Affairs program at Columbia University.

Along with being a writer, poet, graphic designer and photographer, Lorenzo is a director of marketing and communications at a Fortune 500 company in New York City.

Since taking up digital photography in 2005, his photography has been featured in fotoMAGAZIN, Germany's premier photo magazine, and his photos have been cited, posted and published by over 330 other blogs, websites, and print publications.

Lorenzo is an expert and author on street photography, and an award-winning street photographer. As the Photography Examiner for New York for the Examiner.com, Lorenzo chronicles what’s up, what’s new and what’s notable in the world of photography in NYC. In 2008, he was chosen to be the HP Be Brilliant Featured Artist and he became the best-selling author of 25 Lessons I’ve Learned (about photography). Since taking up digital photography in 2005, his photography has been featured in fotoMAGAZIN, Germany's premier photo magazine, and his photos have been cited and published by over 350 other blogs, websites, and print publications. Today, Lorenzo has over 30,000 photographs on flickr.com—where his photos have been seen over 6 million times and where he ranks as one of the site's most popular photographers. He has been called an "Internet photography sensation" by Time Out New York and is considered a "Flickr star" by Rob Walker, Consumed columnist, for the New York Times.