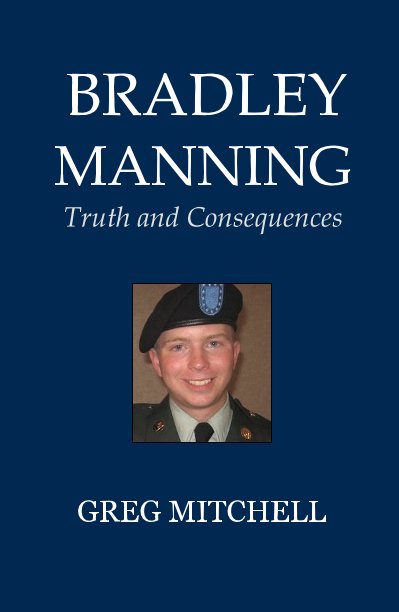 The first book and e-book about the Army private accused of leaking classified material to the whistle-blowing group WikiLeaks. Print edition ONLY available here--but at Amazon for $3.99 as an e-book for Kindle, all phones, iPad, PCs: http://amzn.to/geMUh5 Now updated.

"Bradley Manning: Truth and Consequences" is written by award-winning author Greg Mitchell, whose daily blog on WikiLeaks for The Nation magazine and recent book "The Age of WikiLeaks" (also here at Blurb and e-book at Amazon) have gained a wide following, and praise from Daniel Ellsberg, Amy Goodman, Glenn Greenwald, Bill Moyers and others.

In his new book, Mitchell traces Manning from his childhood in Oklahoma to Baghdad, where he was arrested in May 2010 and charged with sending to WikiLeaks explosive secret reports relating to the Iraq and Afghanistan wars, and diplomatic cables exposing sensitive U.S. relations around the world--and corrupt or abusive practices by other regimes. Is Manning guilty? If so, what was his motivation?

Then Mitchell probes the controversy that has swirled around Manning's harsh treatment in the brig at the Marine base in Quantico, Va., which has led to repeated charges of "cruel and unusual punishment," the firing of the chief U.S. State Department spokesman, and demonstrations all over the world -- even as some pundits and politicians in the U.S. call for Manning's execution.

The book follows the Manning story right up to March 20, 2011, and includes for the first time in print lengthy excerpts from the online "chat logs" used as evidence to arrest him--and from Manning's remarkable recent letter detailing inhumane conditions he endures in prison. It also explores the documents that Manning allegedly leaked and their ongoing impact in the U.S. and around the globe, along with updated look at the continuing saga of WikiLeaks and Julian Assange.

Mitchell is the author of ten previous books for major publishers, including "The Campaign of the Century" (winner of the Goldsmith Book Prize), "Why Obama Won," and "So Wrong for So Long" (on Iraq and the media). He co-authored, with Robert Jay Lifton, "Hiroshima in America" and "Who Owns Death?" He is the former editor of Editor & Publisher magazine. Praise for Mitchell's previous book on this subject:

"From the moment I discovered Greg Mitchell's amazing WikiLeaks blog it has become indispensable. 'The Age of WikiLeaks' follows in the footsteps of his brilliant books on nuclear threat, the Iraq war, the media and American politics." ----- DANIEL ELLSBERG

"One of the nation's most insightful journalists, Greg Mitchell, tackles in this book one of the most fascinating and important political controversies of the last decade: WikiLeaks. Few commentators know more about this vital topic. Mitchell's daily blog has been a must-read for anyone following the WikiLeaks saga." ----- GLENN GREENWALD, Salon.com