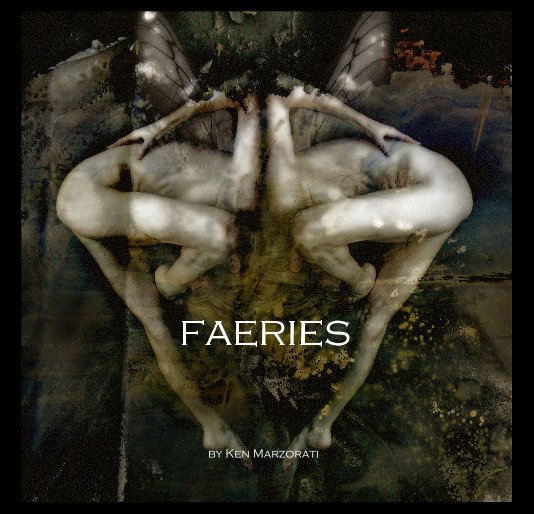 Faerie, or fairy (fâr) NOUN: pl. fair·ies : a spirit or supernatural being found in legends, folklore, and mythology of many different cultures. They are generally human like in appearance and are said to have supernatural abilities, such as the ability to fly, cast spells and to influence or foresee the future. Although in modern culture they are often depicted as young, sometimes winged, females of small stature, they originally were of a much different image: tall, angelic beings and short, wizened trolls being some of the commonly mentioned fay. The small, gauzy-winged fairies that are commonly depicted today did not appear until the 1800s.

... I was sketching in my office one afternoon, burning some time during one of many rainy days the spring of 2006, when my 6yr-old peeked over my shoulder and said, "Daddy, she looks like a faerie", pointing to the model rendering at hand. Indeed she was right, very much a faerie-likeness appeared that very moment. Sprung from this epiphany... the series itself, at first more recreation than art, but as time went on it took on quite a life of its own.

The plate-making process/alchemy was difficult in formulating. I started with heavy 4x5 glass, a magnesium-sulfide and silver photo-sensitive powder, and in a mercury/sulfur bath electroplated the lot with a 22,000volt transformer. My neighbors and the kind folks from DTE were not pleased during the process.

My 4x5 Gostenhauser large-format camera required modification as well. I had to remove the cloth bellows and replace them with ones made from woven sugarcane, making the camera itself unusually bulky and difficult to manage.

I hadn't realized that my contact glass (half the glass equation, the other being the negative glass itself) had become contaminated until well after I had completed photographing the lot; a consistency obvious in most all of the prints in this series. Since I could not easily repair the now contaminated negatives, I chose to continue with the print-making process, especially since the infected areas had as much an organic appearance as the subjects themselves.

As for the faeries... they've trusted me with many secrets, so what I'm at liberty to mention here is limited. I can tell you that they're not at all like Tinkerbell or anything you might expect. Instead, my impression was one of mischievous playfulness mixed with a hint of Eros; think Pixar meets Heidi Fleiss.

Whether you believe any of this or not is entirely up to you. My story could possibly be just that... a story, regardless of the means by which it was told; in words, illustrations, or in this case, photographs. I can assure you, however, that all the images in this series were indeed created from photographs "I" took, and not once was any solely computer-generated, sketched or fabricated in any way.