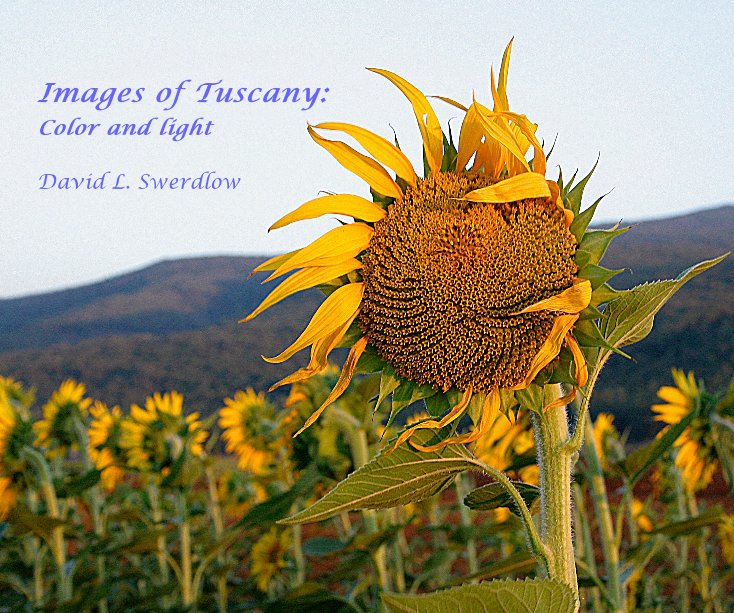 Images of Tuscany: Color and Light

As the seasons pass, flowers turn the hills of Tuscany into seas of red, yellow, and green. Every few days the landscape is dominated by new color- fields that were red with poppies become yellow with wildflowers soon to become green with lush hay. Then in June, as far as the eye can see, row upon row of beautiful sunflowers dominate the hillsides, all facing the early morning sunshine. Every day the farmers' fields change- bright with new images and new perspectives.

The photographs in this book were taken from 2004-2007. I have tried to capture the essence of the countryside, the cities, the food, and the people of Tuscany. Most of the images were taken near Casole d'Elsa, a beautiful hilltop town near Siena and many were captured along a single short stretch of road from Casole to Monteriggioni, a well-preserved medieval town which can be seen in several of the images. Other photographs are from San Gimignano with its beautiful towers, Lucca, Florence, and Siena. The celebratory photographs were taken on July 9, 2006 – the night that Italy won the World Cup.

The photographs in the final chapter of this book are of The Palio in Casole d’Elsa which was first run in 1871 and is a smaller version of the celebrated Siena Palio. In Casole, six contradas (neighborhoods) compete for the coveted palio (banner). Following the preliminary races on Saturday, each contrada has an outdoor dinner where the riders are toasted and fight songs proclaim upcoming victory against the competing contradas. The next day, the horses are blessed by the town's priest and then paraded to the race-course. The excitement builds until the race is held. That evening the town celebrates- the triumphant contrada parades down the main street with their newly won palio and with it, bragging rights for another year. Another year of changing seasons, changing colors, and changing imagery.

David Swerdlow has traveled extensively and has always tried to capture the essence of the people and places he has visited through his photographs. His photographs have been published in several magazines and earlier in his career his work was shown in galleries in Long Island, New York, and San Francisco. During the past two years his photographs have been shown in four galleries, several restaurants, a theater, the Georgia Aquarium, and a wine store. His photographs were exhibited at the Town Hall in Casole d’Elsa in 2006 and 2007 and his photography was highlighted in an Italian Ministry of Health newsletter. Currently in Atlanta he is represented by the Boswell Gallery and his work is highlighted at Bella Tuscany an Italian specialty store, and Tuscan Sun Wellness Center.