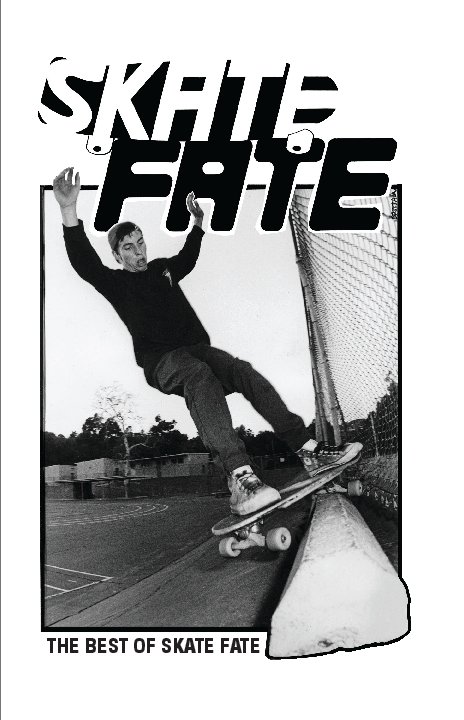 Unleashed upon the skateboarding world from 1981 to 1991, Skate Fate was the first and longest-running homemade, photocopied skate zine. Published by GSD and jam-packed with hilarious interviews, corrosive articles, breath-snatching photography, vibrant artwork, twisted cartoons, clever ads (both real and fake) and the latest news, quotes and slang, it was all spontaneously laid out with ultra-vivid graphic design then urgently slammed into the mailboxes of fellow enthused skaters and zine makers all over the United States.

Just in time for the 30th anniversary, GSD unveils The Best of Skate Fate, a mega-thick, 320-page, stark black-and-white book bursting with the most crucial content culled from the pages of nearly all 76 issues of this legendary zine. It's delivered to you fresh from the pre-computer era, when pens, pencils, paper, glue, tape, triangles and T-squares were the tools of the trade. Scanned directly from the original master layouts, it all looks better than ever!

Articles like "Xerox Scuzz" and "A Sketchy History of Skate Fate" explore the 1980s skate zine phenomenon in detail, while Neil Blender's cartoons featuring Mark Coonson and friends will leave you paralyzed by laugh attacks. Galleries of Skate Fate covers, logos, hand-drawn ads, a Skate Fate collector's guide and so much more wrap it all up. Now is the perfect time to crack open The Best of Skate Fate--a vital, surreal window into the most creative era skateboarding has ever known.

Note: This is a hard cover edition. Check out the soft cover! http://www.blurb.com/bookstore/detail/2340607 The pages of this book are printed on non-glossy, cream colored (off white) paper.

Fine publications about skateboarding, including The Best of Skate Fate book, the first four issues of Skateboarder Magazine from 1964-'65, and Neil Blender and Stacy Peralta's book, First, I Used to Build Giant Thorns.