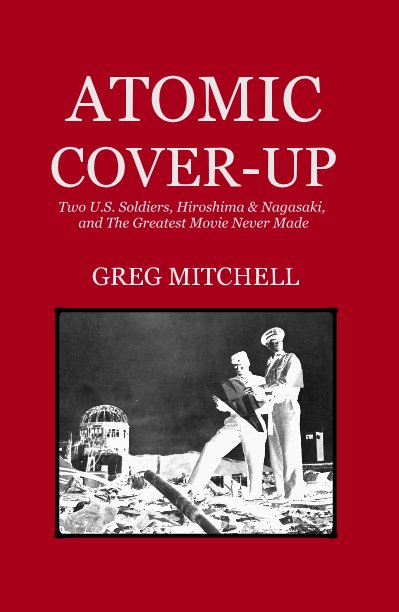 In his latest book and e-book, award-winning author Greg Mitchell probes a turning point in U.S. history: the shocking suppression of film footage, for decades, shot by a U.S. Army film team in Hiroshima and Nagasaki -- a wrong turn with staggering consequences even today. The cover-up even extended to Hollywood, with President Truman censoring an MGM movie.

Print edition of "Atomic Cover-Up" ONLY available here, but in various E-book forms (including for all phones, iPad, Mac and PCs) for just $3.99 here: http://www.amazon.com/ATOMIC-COVER-UP-Soldiers-Hiroshima-ebook/dp/B005CKK9IG Kindle not required.

David Friend of Vanity Fair calls it "a new work of revelatory scholarship and insight by Greg Mitchell that will speak to all of those concerned about the lessons of the nuclear age."

This is a detective story, a profile of two remarkable military officers, and one of the last little-told stories of World War II (and its aftermath). And there was no WikiLeaks to get the film aired. Updated to the present day, it could be titled "From Hiroshima to Fukushima."

Watch 2-minute trailer which includes some of the hidden footage: http://youtu.be/eZYvodtZDTc Or visit the author's blog: http://gregmitchellwriter.blogspot.com/

Mitchell, co-author of the classic "Hiroshima in America" and eleven other books, has written about parts of this story for leading newspapers and magazines, but now tells the full saga, based on new research -- from the Truman Library to Nagasaki.

How did this happen? Why? And what did the two military officers, Daniel McGovern and Herbert Sussan, try to do about it, for decades? "Atomic Cover-up" answers all of these questions in a quick-paced but often surprising narrative. All footage shot by Japanese newsreel teams was also seized and buried for decades.

The book opens this way: "This is the story of twenty hours of film footage, blazing with color, shot in Hiroshima and Nagasaki in early 1946 by a U.S. military crew, that would change the lives of many people, including two American soldiers, and me. Its effect on us, and others, is deep and mysterious, because the film was hidden for decades and almost no one could see it, although that is also why its influence on each of us was so profound. While this unique and disturbing color film languished in obscurity, the atomic bombings nearly fell into 'a hole in human history,' as the writer Mary McCarthy observed, and a costly nuclear arms race ensued. A myriad of nuclear threats plague us to this day."

Mitchell's most recent books include "The Age of WikiLeaks" and "Why Obama Won." His "The Campaign of the Century" won the Goldsmith Book Prize.

Robert Jay Lifton, author of "Death in Life" (winner of the National Book Award) and numerous other acclaimed books, writes: "Greg Mitchell has been a leading chronicler for many years of Hiroshima and Nagasaki, and American behavior toward them. Now he has written the first book devoted to the suppression of historic film footage shot by Japanese and Americans in the atomic cities in 1945 and 1946. This cover-up paved the way for the costly and dangerous nuclear arms race and contributed to the widespread reliance on nuclear power."