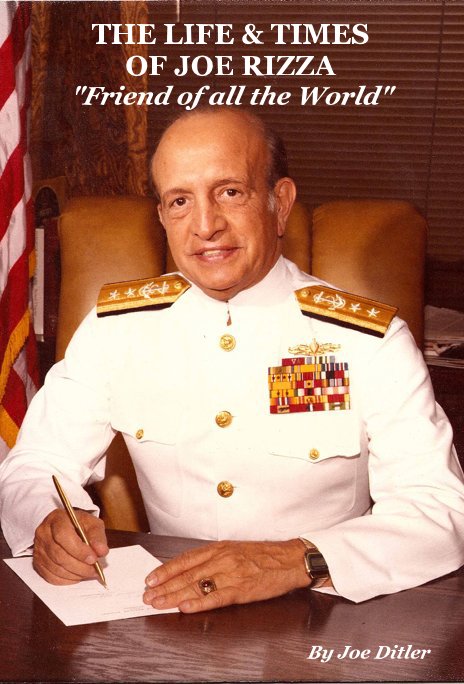 THE LIFE & TIMES OF JOE RIZZA:

FRIEND OF ALL THE WORLD

A reporter at the Sacramento Bee Newspaper once summed up Joe Rizza as a man not to be taken lightly. He went on to say that Joe had “all the appearances of a good small man looking for a good big fight.” How right he was.

Born of Italian immigrants, Joe learned at the age of six that you either worked in the coal mine or shining shoes, or you were thrown back into the orphanage.

Joe worked hard his whole life. At the Pennsylvania Maritime Academy he defied his fear of heights one ratline at a time, under cover of darkness, until he became proficient enough to skylark through the rig of a 19th century training ship harkened from the Age of Sail.

He became the youngest Master Mariner in the Merchant Marine and explored the oceans and continents of the world only to discover that this was the last glimpse of old Colonial Rule before it became contaminated by the West.

After the attack on Pearl Harbor, Joe entered the United States as a young but highly experienced seagoing officer. He liked it so much, he stayed for 30 years.

Joe survived Kamikaze attacks in the Pacific Theatre of WWII. He taught the South Koreans how to build a Navy, he was Zumwalt's Chief-of-Staff in Vietnam, he wrote position papers for the U.S. Joint Chiefs of Staff, he influenced Presidents of the United States, he drove fleets of destroyers through storms at sea, and he was the lone, great white knight to gallop in and save a struggling California Maritime Academy.

Along the way he married a star of the Silver Screen (his boyhood crush), he met Princess Grace and Lana Turner. Henry Kissinger was his professor, Idi Amin invited him on a hunting trip, he broke bread with Ibn Saud on the floor of his desert palace.

Joe Rizza, you see, is "friend of all the world." Now, at 96, he has worked with the author to piece together his very interesting life over nearly a century. He shares it with you now in, "The Life & Times of Joe Rizza: Friend of All the World," a 100-page tome of 17,000 words and 120 photographs.

Joe Ditler writes for magazines as an international waterfront reporter. He has 15 years executive experience with museums and non-profits from San Francisco to San Diego, and specializes in Coronado and waterfront history. He is sole owner and creative director of Schooner or Later Promotions and Part-Time PR, where he works with a variety of business clients, products and authors to raise their public profile in the media. Joe is currently working on three other books about Coronado, and his blog will soon be operational under joeditler.com. He drives a 1924 Model T truck on a daily basis.