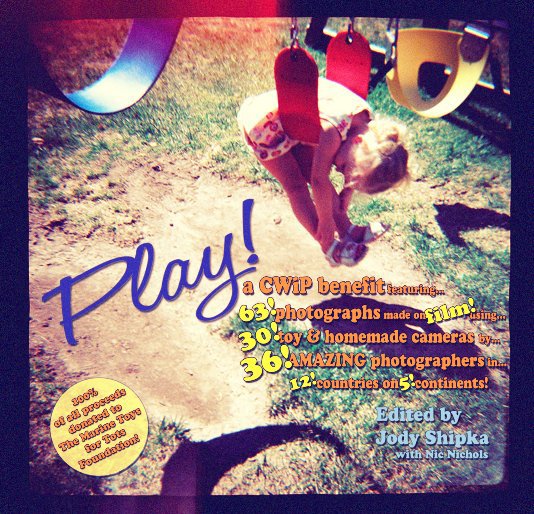 by Edited by Jody Shipka with Nic Nichols

Play! is a collection of 63 photographs made with film using 30 toy, lo-fi, and handmade cameras made by 36 amazing photographers in 12 countries on 5 continents.

In 2011, there were 552 tornado-related deaths in the United States—tied with 1936 for second as the most deadly in US history (the highest being 794 in 1925). 100% of the proceeds from sales of Play! will be donated to the Marine Toys for Tots Foundation to benefit children in areas ravaged by those tornadoes.

Check out what people in the toy and lo-fi camera community are saying about Play!

"Play! is a fabulous book . . . the images really blew me away. The artists and the editor have created Play! with the best of intentions and it reminds us all to remember what’s truly important in this world: film. Play! makes me excited about toy cameras again."

"Play! is an amazingly diverse collection of photos by very talented photographers.. By using toy cameras, the photographers convey the memory and dream of play that lives inside all of us."

"The collection of images in Play! draws a thread between adults captivated by the magic of toy cameras and the people, mostly kids, they photograph in the act of play. What better way to remember the joy prevalence of playtime we once had than by using simple cameras to make beautiful, sophisticated images."

"Play! is reminiscent of childhood, full of blurred moments. Toy cameras lend themselves so well to these youthful subjects. They're long ago memories of times & places we hold dear. Play! takes you right back, but in a dream."

"PIay! showcases a raw glimpse of children in their favorite element. The selection of candid photos tugs at the emotion and draws you in to a world of Play! as seen in its most delightful form. It's a journey with children and their toys that you'll want to enjoy again and again."

Play! is the third book in what we are now calling our Response to Disaster Series—a series of books designed and published in direct response to environmental and human-made disasters. Like with all our books, in the Response to Disaster Series 100% of proceeds go to charities to benefit victims of the disaster. Proceeds from sales of Play! will be donated to the Marine Toys for Tots Foundation to benefit children in areas ravaged by tornadoes in the United States in 2011.

The photographers whose work is included in Play!:

Be sure to see our other books on Blurb as well as our web site: composingwithimages.com.

Jody Shipka purchased her first Holga on May 16, 2008. A month later, her first Diana arrived. In November 2008, she built her first matchbox pinhole camera. Since then, she’s come to believe the following to be true: 1. A person cannot own, make or modify too many cameras (Jody currently has 300+); 2. One should never venture out with fewer than three cameras on one's person; and 3. When it comes to cameras, the cheaper and lower-tech they are, the better. When she’s not collecting, making, or modifying cameras, Jody enjoys being an associate professor at University of Maryland, Baltimore County, where she teaches courses in technology studies, visual literacy and play theory.

Nic Nichols is the founder and editor of FourCornerStore.com and owner and editor of ToyCamera.com, the largest independent Toy Camera portal. He has reviewed virtually every toy camera ever made.