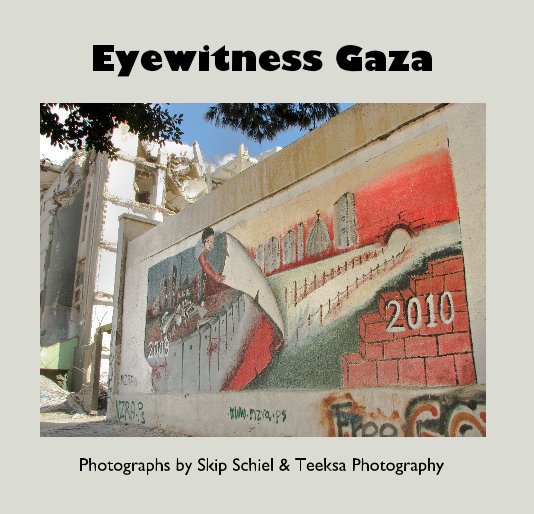 Photography of the current conditions & struggles in the Gaza Strip, Occupied Palestine

by Skip Schiel and Teeksa Photography

I began the multi-year photo project that led to this book after I'd grown successively and painfully aware of the conflicts in Palestine/Israel. My first trip with a delegation in 2003 confirmed my decision to photograph with an open heart the situation and struggles for justice, peace, and security in the Levant. Growing up Catholic seeded my desire to travel to the Holy Land and "walk in the footsteps of Jesus." My work in South Africa during the final phase of apartheid illustrated the many parallels between apartheid there and injustice in the Levant. My escalating awareness stirred me to take some sort of action to at least quell my own outrage. And that first trip brought me face to face with the famed Mediterranean light which continues to challenge me as an artist and human being. Also, personal connections with so many Palestinians and Israelis working for justice with peace—risking their lives—encourage me to continue.

The situation is both complex in how we tell the story and parade the justifications and yet simple on the level of injustice, impunity, the violation of international law, and the denial of basic human rights. I hope at the very least to open a few windows and doors for others who may seek comprehension of the situation and action to transform it.

At the moment, in short, the situation is dismal, perhaps the worst in decade—but with strong determination on the part of many Gazans to end the siege, end the occupation, end the entrapment, end the injustice, and breathe free. "Worse than a prison," as my friend Husam stated a few years ago before conditions worsened in Gaza, "now a graveyard."

My experience on the ground—five visits since 2004—inspires me. I have noticed much sumud (steadfastness), better use of media, the rise of the youth movement that is coincident with the Arab Spring, and expanded international awareness. The Boycott, Divest, and Sanction Movement (BDS) confirms my hope for eventual resolution.

The photos in this book were mostly made in 2008-2010 and many appear in the movie by Tom Jackson, Eyewitness Gaza.

Through photography I love: daughters, friends, the earth. Through photography I am outraged: at injustice, pomposity, violence, deceit, ignorance, greed. Through photography: I am perverse, critical, analytic, emotive, radiant, clumsy, elegant, adventurous, irreverent, romantic. Through photography: I am a person of the world, of the cosmos. And I am a recluse, an isolate, a monk. For all this I am very grateful. I praise my photographic lineage—ancestors who have taught me, contemporaries who cooperate with me, and successors who might benefit from what I've attempted to do. I thank the great mystery, god, the higher power, the ground of being, the still small voice inside, my dearly beloved and indispensable muses, and the pulse of the universe for allowing me—perhaps—to be aligned with this force, rather than opposed to it. Photography is my main form of prayer—I pray outward to the beings, things, forces I photograph. I pray inward to my own center by sensing the light within.