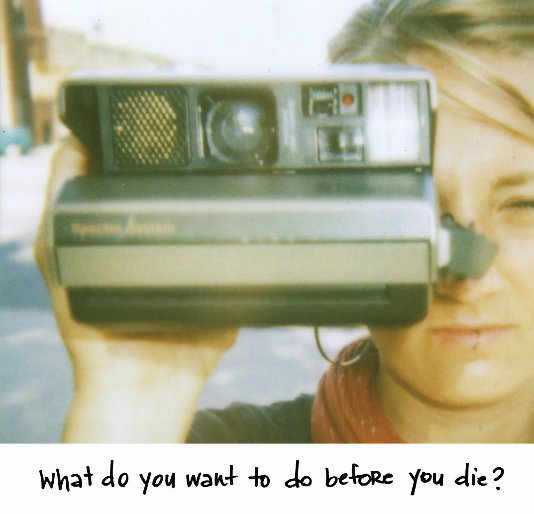 by Nicole Kenney and ks rives

What do you want to do before you die? Hearing different answers to this question from hundreds of people makes one wonder: What motivates people to take action in their lives? What values do we hold as a society? And what values do other societies around the world find important?

The "Before I die I want to..." project was inspired by a combination of factors: (1) the “death” of the Polaroid, (2) a psychologist’s tool called “safety contracts,” and (3) a passion to get people to think about (and act upon) what is truly important in their life through this simple question.

(1) With the prevalence of digital photography, Polaroid announced its discontinuation of products, or in other words, its “death.” Film will be sold until the current inventory is out, which is projected to be 2009. No more cameras are being made.

(2) Psychologists have found “safety contracts” to be a useful tool when treating suicidal patients. When a psychologist finds a person to be suicidal, if they ask the patient to give their word that they will not harm themself for a certain period of time (until the next appointment, for example), often times the potential victim will choose to remain alive based on this promise. That human connection of making a promise to someone and understanding that someone cares, notices, and expects something is motivation to stay safe. Although that is an extreme example, we are hoping that "Before I die I want to..." will work in the same way. By asking people to write down something they want to do before they die and to be aware we will be checking up on them in a number of years, we believe that this will add significantly to their motivation to accomplish their goal. The added fact that the photos and statements will be published online and in print will urge people to fulfill their goals.

(3) One part cultural study, another part an encouragement to reflect on priorities and take action on dreams, the "Before I die I want to..." project will create a new dialogue in the realm of sociological art. The project aims to urge people towards thinking about and fulfilling their life goals by asking them to make a promise to themselves and to the photographer.

Process
The creators, Nicole Kenney (Brooklyn, NY) and ks rives (Chicago, IL), keep their Polaroid cameras close at hand, taking portraits wherever they go to add to the collection. They snap the photo while the participant is saying what they want to do before they die, getting them in the act of stating their desire. Nicole and ks then request that the subject writes his or her statement on the Polaroid starting with the words “Before I die I want to....” As the subjects are signing the release form, the artists ask them to include their email.

The website for this project, www.beforeidieiwantto.org, is updated continuously with new portraits.

In a number of years (five, ten, twenty, etc.), Nicole and ks will contact the participants via email to see if they have accomplished their goal, if they are on their way, or why they haven’t made steps in that direction. At this future time, Nicole and ks will ask them to write a short story next to their photo on the website about fulfilling their expressed want. Seeing online that other people are fulfilling their desires will help motivate participants to complete their task and write a story of their own.

The book
This book includes 111 Polaroid portraits from this project.

About the authors
Nicole Kenney and ks rives met at Saint Mary’s College in 1998 in their very first collegiate art class. They have been exploring psychology, sociology, and art together ever since. This is their first project together as a team.

ks finished school at Columbia College Chicago with a degree in art and design and an emphasis on sociological studies. ks is a racehorse when it comes to what she wants to do in life. She is passionate about art, environmental conservation, and discovering culture. She is excited for the revelation that this project will offer. She shoots on a Spectra Polaroid camera.

Nicole completed her Bachelor of Fine Arts in design and psychology at the University of Notre Dame. Nicole was awarded an artist-in-residency position at Fabrica, the United Colors of Benetton’s young artists research center in Treviso, Italy for 14 months. Now living in Brooklyn, she creates autobiographical artwork, where she analyzes herself and her culture. Nicole’s great aunt died when she was seven, and this begun her awareness of mortality and the fragility of life. Her volunteer work at hospice helps her further meditate on this topic. Her favorite camera is her granddaddy’s Polaroid SX-70.