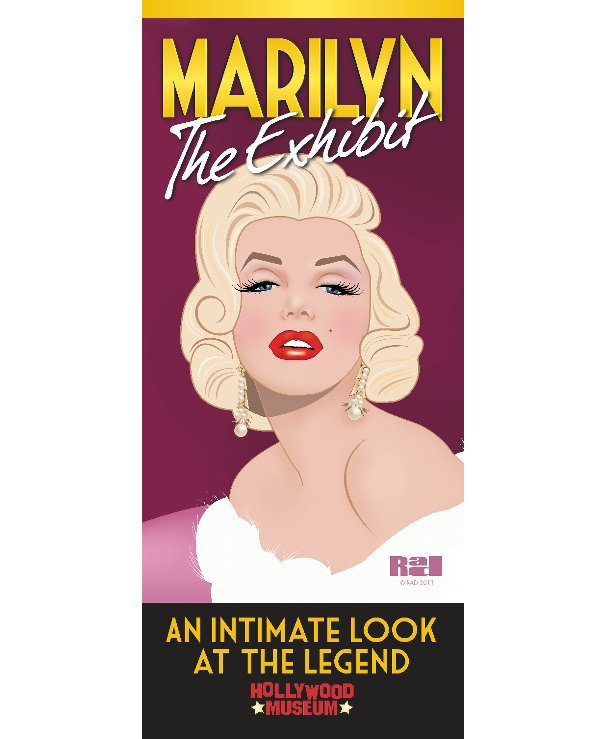 An Intimate Look at The Legend

The official exhibit catalog for the 2012 Marilyn Monroe Exhibit at the Hollywood Museum.

The Hollywood Museum celebrates Marilyn Monroe’s birthday with “MARILYN: THE EXHIBIT - An Intimate Look At The Legend,” the nation’s largest exhibit of authentic memorabilia celebrating the fabled actress’ life, opening June 1 - September 2, 2012. This year also marks the 50th anniversary milestone of Monroe’s passing. The Hollywood Museum in the Historic Max Factor Building is located at 1660 N. Highland Ave at Hollywood and Highland.

“Marilyn Monroe: The Exhibit” displays the million-dollar dress Monroe wore on her honeymoon with Joe DiMaggio, made famous when she entertained the troops for USO shows in Korea. Items from the Scott Fortner Marilyn Monroe Collection and the Greg Schreiner Marilyn Monroe Collection will be featured in this exclusive exhibit, including film costumes from The Prince and The Showgirl and There’s No Business Like Show Business, clothing and furs from Marilyn’s personal wardrobe, including the brilliant green Pucci blouse Marilyn was wearing in the last ever photos taken of her just a week before she died, along with Marilyn’s personal cosmetics, private documents and annotated film scripts. On exhibit for the first time ever: Marilyn Monroe’s bedroom dresser, which was next to her bed the night she died. This exhibit also includes original works of art by famed celebrity artists Robert A. Delgadilloo and LUDVIC, original photographs, including the legendary “red velvet” nude photographs shot by Tom Kelly, and a vast photograph collection of her childhood, family and early modeling career when she was still Norma Jeane Baker; and much more.

Highlighting the exhibit are never-before-seen photos by world-renowned photographer George Barris, who shot the last pictures of Monroe while collaborating on a book at the time of her death 50 years ago.

“The Hollywood Museum in the Historic Max Factor Building is the perfect venue for this exhibit because it’s where Max Factor gave Marilyn Monroe her famous blonde hair,” says Museum Founder and President Donelle Dadigan. “When you walk into the ‘FOR BLONDES ONLY’ Room, you feel Marilyn Monroe’s presence.”

To commemorate the 50th Anniversary of Marilyn Monroe’s death in August, The Hollywood Museum will host another special event celebrating MARILYN: THE EXHIBIT, spotlighting Monroe’s last photo shoot ever, with photographer George Barris.

“Fans of all ages flock to Hollywood from around the world each year to honor Marilyn’s life and memory,” says Dadigan, “The Hollywood Museum is proud to host this definitive and meaningful Marilyn retrospective.”

ABOUT THE HOLLYWOOD MUSEUM

The Hollywood Museum, the official museum of Hollywood, has the most extensive collection of Hollywood Memorabilia in the World. The museum features four floors of breathtaking exhibits and is the home of more than 10,000 authentic showbiz treasures, one of a kind costumes, props, photographs, scripts and vintage memorabilia from favorite movies and TV shows. The museum includes costumes from Elizabeth Taylor, Marilyn Monroe, Jean Harlow, Elvis Presley, Michael Jackson; Props from ‘Gone With The Wind,’ ‘Twilight: New Moon,’ ‘Star Trek,’ ‘Transformers:Revenge of the Fallen,’ ‘High School Musical 2,’ ‘Dancing with the Stars,’ ‘Glee,’ and more. The Hollywood Museum is located in the Historic Max Factor Building on the corner of Hollywood & Highland, where Max Factor, the legend of movie makeup, worked his magic on motion picture stars since 1935. The Hollywood Museum is a 501(c)(3) non-profit organization.

WHERE: The Hollywood Museum