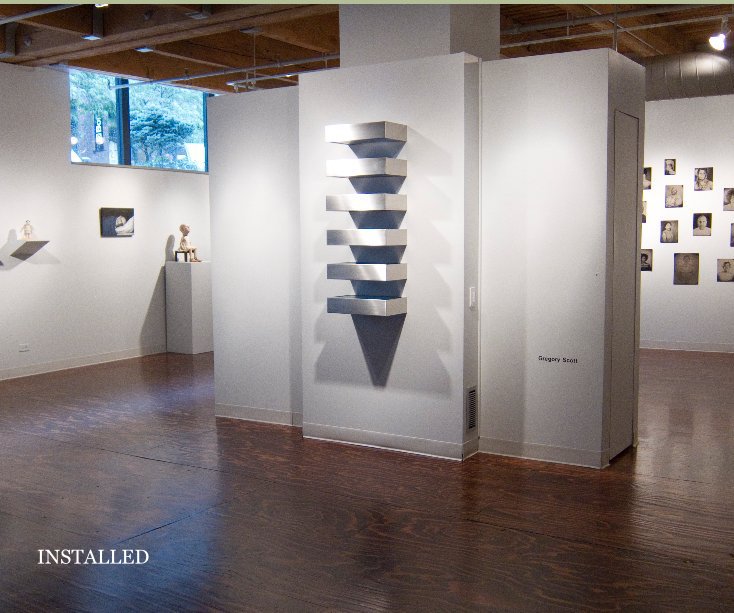 An artist’s body of work is usually viewed on a computer screen, smart phone or in a book, focusing on one piece at a time. While artists rely on these methods to disseminate images, certain work benefits greatly from a carefully planned installation, for greater impact.

Keliy Anderson-Staley has spent the past few years working on a project called [Hyphen]-Americans: Tintype Portraits. The title alludes to the hyphenated origin of American identities (Irish-American, African-American, etc.). Anderson-Staley presents an installation of 43 small tintype portraits (from an ongoing series of 2000+) along a 21 foot wall, creating a dialogue among the featured faces, showcasing a portrait of Americans.

John Cyr presents a grid of nine photographs (from a series of 71) of developer trays by well-known photographers, creating an elegy about a bygone era in the age of digital photography. Through these photographs, Cyr reminds us of the lost art of black and white printing, and the chemicals, staining and smells that no longer exist.

Elizabeth Ernst presents three new mixed media photo pieces, alongside the sculptures she made that are featured in the photographs. Working with clay, paper mache and metal objects, Ernst photographs her created characters (now totaling more than 30) for her ongoing project, The G.E. Circus, which examines the public and private personas of people in her fictitious circus.

Myra Greene presents 21 small format Ambrotypes (from a series of 60) of her lips, eyes, nose and ears, from her series Character Recognition. Tainted with the visual history of American slavery, these images point directly to the features of race and modes of classification.

Gregory Scott debuts his newest video piece installation, Judd with Air and Water. Six shelves hang on a wall, incorporating videos of the sky and water. As is typical in Scott’s work, the artist can be seen flying through the elements, interacting with the shelves in unexpected ways, while honoring the exploration of space and minimalism associated with Donald Judd.