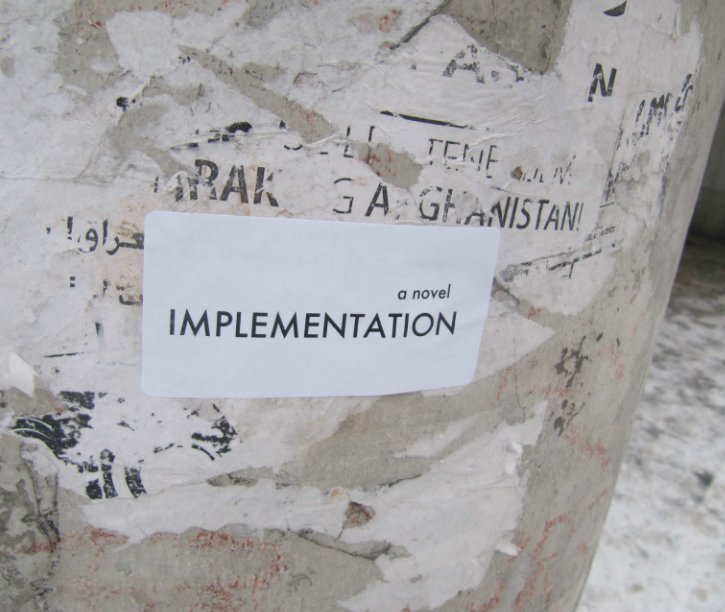 by Nick Montfort and Scott Rettberg

Implementation was written collaboratively and sent serially through the mail in the form of eight roughly chronological installments, each consisting of texts on thirty stickers. The stickers were also made available online in different paper sizes, so that people could print them out on standard sheets of business-size shipping labels. Participants attached stickers to public surfaces around the world, so that whoever happened to wander by the stickers could read them. Some of these placements of stickers were photographed by participants, and the photographs were sent back to be archived on the Implementation website.

Because of the origin of this novel on sheets of stickers, and because of the way these stickers have been situated on public surfaces, Implementation consists of 240 short texts, any number of which can be read in any order. In this book, all these atomistic texts have been arranged with a cohesive narrative flow in mind. Each page includes placements of the narrative stickers on various public surfaces. It is a book to be read in photographs.

Implementation is about four main characters: Frank, Samantha, Kilroy, and Roxanne, who live in a Midwestern town. The action of the novel begins in September 2001 and runs through the beginning of Operation Iraqi Freedom in 2003. One of the characters, Kilroy, is a reservist who is called up and then sent to Iraq, but the other characters are affected in much more oblique ways by the attack on the World Trade Center and the changes that follow. They continue to dine at restaurants, drink at bars, work, worry about their jobs and careers, have flings and relationships, and go to celebrations and funerals. While even a bombing in town changes little on the surface of these lives, the effects of the war can be read in shifts in their gestures, longings, and language. Implementation is a novel about the peripheral, everyday, psychological toll of the war on terror.