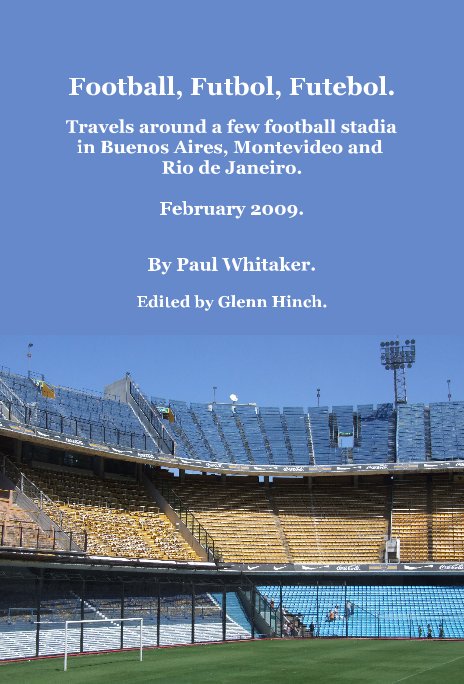 ‘Football, Futbol, Futebol’ recounts the experiences of two football supporters, Paul Whitaker and Glenn Hinch who, having become increasingly disenchanted with the commercialisation of the game in England, travelled to South America in February 2009 to rediscover how football should be played and supported.

Twelve days of ‘football therapy’ began and ended in Buenos Aires, Argentina, watching matches at Argentinos Juniors, Boca Juniors (twice), Racing Club and River Plate. A ferry ride across the Rio Plata from Buenos Aires was Montevideo, where the iconic Centenario stadium hosted the Uruguayan championship play-off match between Nacional and Danubio. Finally, a three hour flight from Argentina was Rio de Janeiro, where Brazil’s most famous football club, Flamengo, played at Brazil’s most famous stadium, the Maracana. A pilgrimage to a litter strewn football pitch in Buenos Aires’ Villa Fiorito slum, where a boy called Diego Armando Maradona played his first football match, was somehow squeezed into the itinerary.

Although seven matches and fifteen stadiums in three countries is clearly inadequate to do South American football justice, ‘Football, Futbol, Futebol’ hopes to give you a snapshot of the sheer joy Paul and Glenn had watching football in Buenos Aires, Montevideo and Rio de Janeiro.

Brief sections include football club histories, supporter culture, the stadiums visited, where and how match tickets were bought, some useful vocabulary and all interspersed with over 268 photographs of the cities, stadiums, supporters and matches.