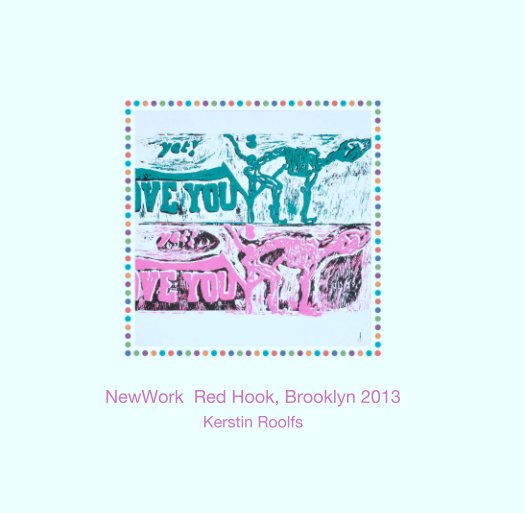 Kerstin Roolfs has been making and documenting her artwork for over twenty years. First in the catalogue Berlin-New York I.Decade (1990-2000) and now in New York II.Decade (2000-2013), the artist, originally from Germany, has placed emphasis on the sense of place and where she has been based while making her work. (…)
Having spent time working in a studio in Williamsburg, Brooklyn for many years, 2013 also the time of publication, finds the artist currently based in Red Hook, Brooklyn. It is in this studio that she has made both woodcuts and linocuts printed in various, yet mostly monochromatic, tonalities. Some of these printed works focus on life and death. In pieces titled alive, life & death and skull & dog, the images are contextually dark but teeming with hope, as lines and forms bounce around within the interior of the surface. Also while based in Red Hook, Roolfs has made large scale paintings, densely layered with drawings in oil paint. Here her subjects range from her dogs, a male figure sporting a moustache and swim goggles and a large pink mouth, slightly parted. Although paint on canvas, it is almost as if the print making process has influenced her work on canvas, as multiple images are repeated, as if stamped yet altered ever so slightly, black on white and sometimes color in a washy layer of paint.
excerpts of the text by Katy Hamer 2013