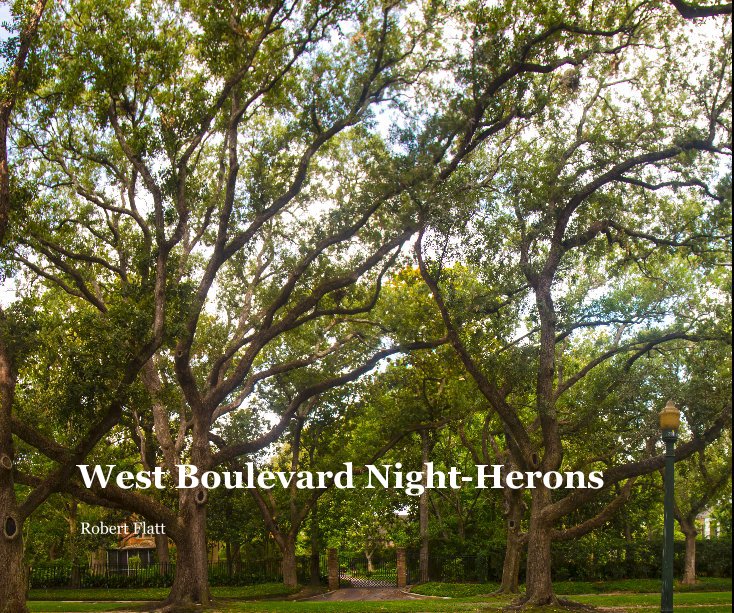 
This is a photography book about the Night-Herons that nest in the century-old live oaks of North, South and West Boulevards in the Museum District of Houston, Texas.

The heronry that expands over three long U shaped blocks has grown over time and while initially it was mostly Yellow Crowned Night Herons, the more penguin-like Black Crown have been making territorial moves over the past few years and now it’s a mix of the two species. Well over a hundred birds arrive each February to March and they stick around until their young can fend for themselves – on into June.

And these birds are beautiful and odd and graceful; ungainly and exotic and strange. They are arresting in flight, look like lawn ornaments (rock still) when hunting on grass or in the streets; are impossibly awkward as they try to land on fences, and their young could double as baby dinosaurs.

Robert Flatt’s photographs of these birds do them and their wonderful lives justice. He captures them at all stages of development. He photographs them in moments of grace, ineptitude, quiet, rancor and ongoing family life. He photographs the herons just getting through a heron day. He tells their story well and the story is beautiful and funny and complex.

Robert, who within minutes will tell you that he has Parkinson’s and that “Life is good!” has been dedicated in this work. For this project he arrived early each morning and returned for weeks on end, lying back in his portable lawn chair, waiting for heron events to happen: watching, sensing, seeing, snapping, following.

With these birds and their habitat, Robert mixes exquisite time and wonderful coherence. His images are very precisely framed and they show us the lives of herons in a shared community. This work has it all: visual content, elusive and magical time, natural history, color, and the unique Robert Flatt saturation. All blend together into moments that speak eloquently to us all.

Hello – my name is Robert. I started my crazy passion to become a photographer in 2000 when I discovered I had Parkinson’s disease. I began taking photography courses at Rice University, and now I am consumed by it. My wife and I love to travel to wild and beautiful places. We accelerated our travel schedule due to my Parkinson’s disease. Parkinson’s disease has helped me “slow down” to see this beauty and has given me the urgency to “hurry up” and capture as much as I can photographically while I still can. I love highly saturated pictures, full of color, full of life, with vibrant, surrealistic backgrounds. I enjoy using my camera and Photoshop to paint pictures of birds flying and bees buzzing and dragonflies basking in the sun. I hope you enjoy my pictures. Life is good!!!!! Robert received his Bachelor of Arts and Masters Degree in Electrical Engineering in 1970 from Rice University and his MBA from Harvard University in 1973. He and his wife Nancy live in Houston, Texas.