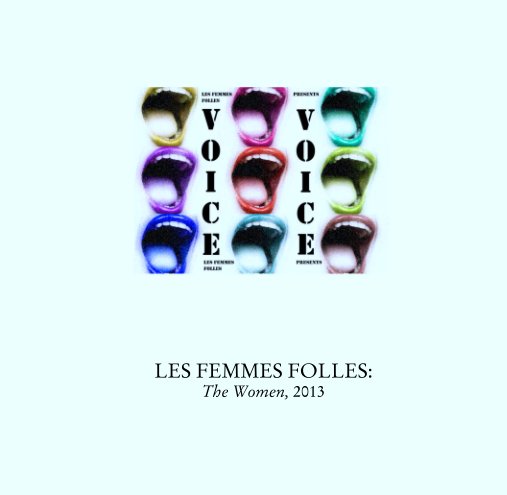 The 3rd LFF anthology includes art, poetry and interview excerpts from over 100 women in all forms of art featured on femmesfollesnebraska.tumblr.com in 2013. LFF is a volunteer run organization founded with the mission to promote women in art; originally inspired by artist Wanda Ewing and her exhibit, Les Femmes Folles (Wild Women). A portion of the proceeds from LFF Books benefit the University of Nebraska-Omaha’s Wanda Ewing Scholarship Fund. LFF Books is a micro feminist press that publishes 1-2 titles a year, including INTIMATES & FOOLS (poetry by Laura Madeline Wiseman, art by Sally Deskins, 2014). femmesfollesnebraska.tumblr.com/lffbooks

Words of praise:
“You be you,” writes Wanda Ewing and this is what Les Femmes Folles anthologies are about—women being themselves, making the fierce, wild, and audacious art that allows them to be, as Ewing said about her own work, “tenacious as hell.” This third annual edition celebrates the art of 102 women of the 500 women who’ve been interviewed since its inception. This sampling of women from 2013 features artists from Omaha, Pittsburgh, Morgantown, and beyond who write about feminism: “feminism is what has allowed me to work” (Chris Willey) and “Feminism gave me the language for the things I had been feeling” (Lisa Lux). They write about the female body: “a woman’s body is so powerful and beautiful” (Lauren Rinaldi). They write about women’s stories: “I gravitate toward stories of strong women Doing Things” (Kathryn Lejeune). Full of art, poems, and interview excerpts, Les Femmes Folles 2013 Anthology: The Women celebrates and honors the power of female creation in the hands of powerful female artists—wild women, les femmes folles. ~Laura Madeline Wiseman, poet

Rather than lament the inequalities faced by women artists, Deskins shines a light on them. By doing this she (and her fellow artists) is/are pushing back against the patriarchy of the art world by carving out places for themselves. ~ Ivory Owl Reviews

Sally Deskins is an artist and writer, focusing on women and feminist writers and artists, including herself. Her art has been exhibited in galleries in Omaha, New York, Philadelphia and Chicago; and has been published in publications such as Certain Circuits, Weave Magazine, Her Kind: A blog by VIDA Women in Literary Arts, Vagina, CLAP and Whitefish Review. She has curated various solo and group exhibitions, readings and performances centered on women’s perspective and the body. Her writing has been published internationally in journals such at STIRRING, CACTUS HEART, HER KIND and PRICK OF THE SPINDLE. She edits the online journal Les Femmes Folles, has published three anthologies of art and writing and her first illustrated book, Intimates & Fools, with poetry by Laura Madeline Wiseman, came out in 2014. http://www.amazon.com/dp/0615947492/ref=cm_sw_r_fa_dp_q8t0sb18HA8KBEJ1 Femmesfollesnebraska.tumblr.com Sallydeskins.tumblr.com (photo by g thompson higgins 2011)