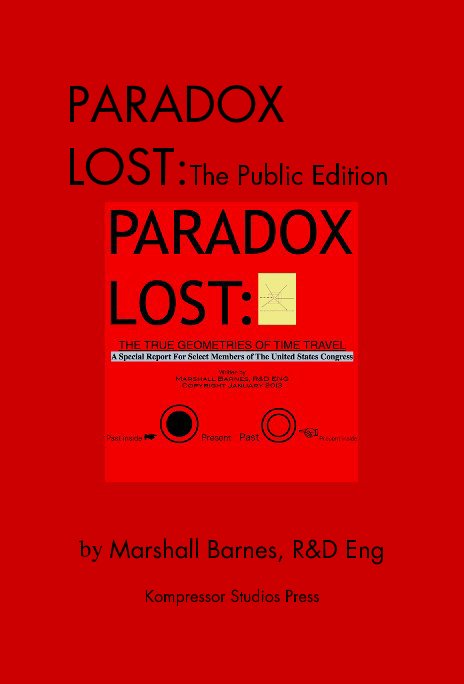 This book is by internationally noted research and development engineer, Marshall Barnes, and is based on his special report for select members of the United States Congress on the coming reality of time travel, which is now here on the particle level. The only authoritative book on the subject of time travel, it scientifically answers all the issues around the topic, proves why paradoxes are impossible and why the world's physicists have been so wrong about time travel for so long. Includes definitive analysis of errors by Stephen Hawking, Kip Thorne, Paul Davies, Tim Maudlin, among others. Answers Kurt Godel's famous question of how can a past that hasn't passed yet, be the past, and many other issues left unanswered by all other sources.

Among outstanding features, it details Marshall's creation of the Verdrehung Fan™, the first time machine in the world, that is sending signals through traversable micro wormholes, as speculated could be possible in New Scientist magazine, May 20th, 2014. The Einstein related physics from which it works and how Marshall used it to defeat world famous Ronald Mallett in the race to build a time machine, is revealed as well as why Mallett is far less than the media has made him seem.

Easy to read but rich in detail, this book will be a challenge for scientist and non-scientist alike, with preconceived notions about the subject, as all cliches are dismantled and discarded, revealing stunning, hidden truths that are reached without ever taking a step off the path of known physics. This is the book for those wanting definitive answers backed by definitive proofs and calculations, without dealing with the heavy mathematics.
Author website
http://lanyrd.com/profile/paranovation/bio