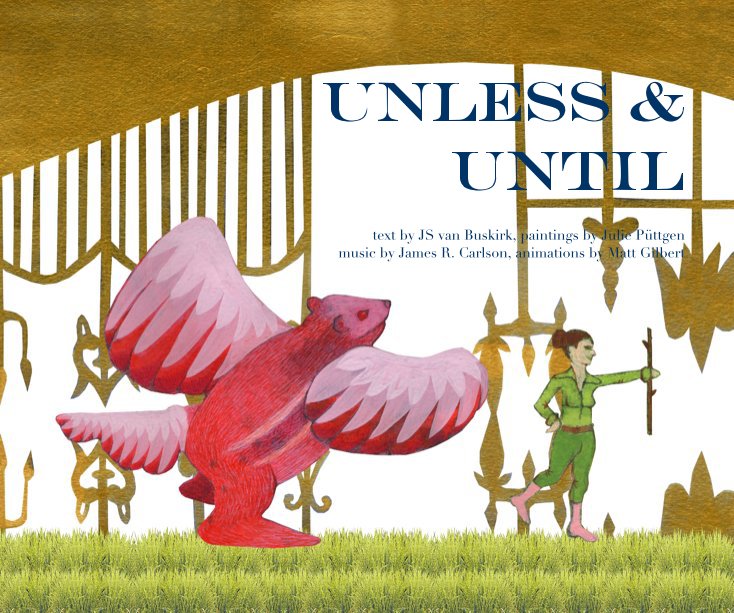 Unless and Until (hardcover)

Unless & Until has evolved as the result of a collaboration in chance and friendship. In January of 2008, I began making a series of paintings on paper. Each of these began as loose, chaotic washes of color, into which I would gradually “read” a narrative, pictorial space. I called the series Cloudmapping, in honor of summer afternoons spent finding elephants, crocodiles, castles, and other marvelous things in the clouds.

After about six of these paintings, I realized two things: one, there was a story linking them together; and two, I was not the one to do the job of writing it. I contacted my childhood friend JS van Buskirk to ask if she might be interested in reading the story into the paintings, just as I had read the paintings into the rough washes. She agreed to write, provided I would agree not to see the story until I had completed the twenty-four projected paintings in the series.

Around the same time, my friend and colleague Jim Carlson saw the paintings, heard about the collaboration JS and I had started, and offered to compose music based on the text – a wonderful possibility. JS began writing lyrics or occasions for music into each of her chapters, and Jim brought the text’s shanties, chants, and toast-songs to life.

Meanwhile, having completed the paintings, I had spent six (somewhat distracted) months creating the prelude animation for the project. I knew that animation was the necessary next step in the project – as a way to bring all the other elements together – but after so much time peering at various video-editing interfaces, I had to admit that working on a large-scale animation project myself would bring me no joy.

Trusting chance again, I sent out a call for an animator on Artnews (the Atlanta artists’ listserve). Wanted: highly skilled person for unpaid collaboration of alarming proportions… Matt Gilbert has proved uncannily amazing for the job, conjuring up fireworks of holy doves and looming whales, and pushing the definitions of the project far beyond what we had imagined possible.