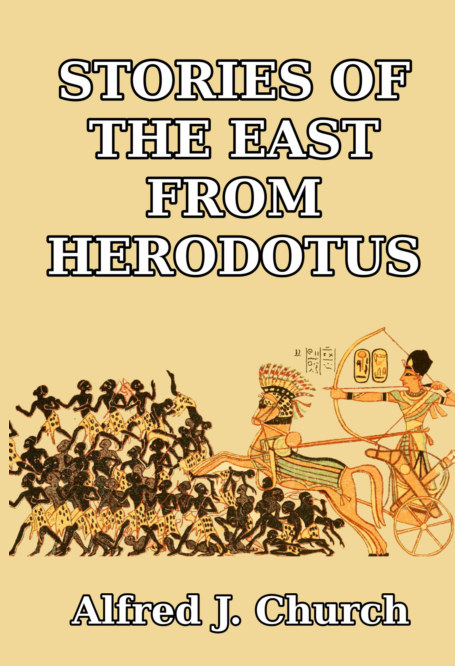 Stories of the East from Herodotus

This book may be found in online bookstores, like Amazon.com, using the ISBNs below:
Hardcover, ImageWrap ISBN:
9781389487606

Herodotus, the “father of history,” is possibly the most famous historian of all—and perhaps the most maligned, despite his clear warning at the start of his book that he was merely recording, not vouchsafing, those things that he had not seen himself. As a result, his accounts are often dismissed, but as Alfred Church’s masterful retelling shows, this is an unjust assumption.
Starting with the reign of King Crœsus of Lydia (ca. 560 BC), his wars with the Persians, and the rise of Cyrus the Great of Persia, Herodotus’s story line moves through the late Egyptian dynasties, and deals with their downfall and submission to the Persians. The stories of Cyrus’s successor, Cambyses, and the renowned King Darius are related, along with a fascinating—if brutal—account of the habits of many of the peoples, Indo-European and otherwise, who shaped the destiny of the Ancient Middle East.
The author is as careful as Herodotus in his relation of the ascertained facts, and writes in his preface:
“I should be sorry that readers who are not acquainted with the work of the ‘Father of History’ should carry away from this book the impression that he is nothing more than a credulous and gossiping teller of stories. That he was often deceived, and that he writes with a simplicity which is quite remote from our ways of thinking, is manifest; but those who know him best are aware that he was nevertheless a shrewd and painstaking observer, whose credit has been distinctly increased by the discoveries of modern times.”
This edition has been completely reset, and contains all the original text and illustrations.