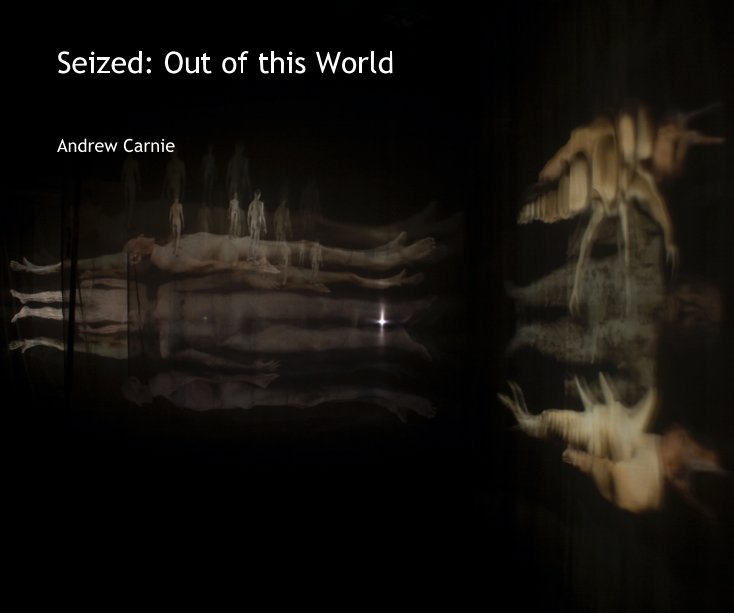 Seized: Out of this World

This book is a visual exploration of Temporal Lobe Epilepsy. Temporal Lobe Epilepsy, TLE, has affected many creative individuals and is thought to be the source of much artistic inspiration. Artists like Vincent Van Gogh and Fydor Dostoevsky are just two such significant creative people. The electrical storms associated with this condition are considered to cause a kind of cross-pollination of ideas between different functional areas of the brain, giving the artists extraordinarily insightful visions, which feed into their creative practice. Much of the work and research that exists is visual leading to a goldmine of information for an artist like myself interested in the visual and the underlying neurological condition.

The sequences within the time-based work ‘Seized Out of this World’, deal with particular elements of Temporal Lobe Epilepsy as described in Geschwind Syndrome which is a personality syndrome consisting of symptoms such as circumstantiality, excessive verbal output, hypergraphia, writing or drawing a lot, altered sexuality, often hyposexuality, but it can be hypersexuality, an intensified mental life, deepened cognitive and emotional responses, hyper-religiosity and or hyper-morality. Sufferers also frequently experience déjà vu, where a new encounter is felt to have been experienced before, or jamis vu, where the sufferer does not recognize a familiar situation. TLE sufferers often have a number of these characteristics to one degree or another. Some sufferers also experience out of body sensations and historically sufferers were thought to have been affected by external powers. All these characteristics have fed the various sections of the time-based work ‘Seized’. Behaviours associated with this syndrome can be seen both in the inter-ictal, (between seizures}, and the ictal, (during seizures), states. The condition is widespread throughout the world and the severity of seizures people suffer from can vary a lot. Those who suffer from epilepsy are frequently stigmatised by the condition as it can interrupt their pattern of daily living; though modern drugs can often control the seizures.

The syndrome is known after the two doctors who undertook a great deal of work in the field of TLE and who first characterized the syndrome, Norman Geschwind and his colleague Stephen Waxman. The syndrome describes a range of behaviours and personality features associated with the condition and makes it seem more like a specific psychiatric disorder, and as such has been criticised for this element because underlying it is a neurological condition; some form of scar tissue within the brain specifically within the temporal lobe region.

Seized, is a time-based work using three pairs of projectors. Each pair of projectors projects images onto three semitransparent voile screens set between the projectors. In each pair images rise from one projector and then dissolve into images from the second projector. Each set of projectors works through its slide sequence independently from the other pairs showing primarily the same sequence of images with some variations. The same images will be seen at one time or another on all the screen sets but rarely at the same time.

The work ‘Seized’ was made with support and direction from Paul Broks, neuropsychologist, Senior Lecturer in Clinical Psychology at Plymouth University and Honorary Consultant in Neuropsychology at Derriford Hospital, Plymouth and Dr Adam Zeman, Professor of Cognitive and Behavioural Neurology, University of Plymouth. Both shared their knowledge and understanding of Temporal Lobe Epilepsy and arranged for me to meet patients who kindly gave me time to talk to them about their condition and the effects it had upon them which all fed into the production of ‘Seized Out of this World’.

ANDREW CARNIE was born in 1957. He studied chemistry and painting at Warren Wilson College, North Carolina, then zoology and psychology at Durham University, before starting and finishing a degree in Fine Art at Goldsmiths College, London. Andrew then completed his Masters degree in the Painting School, at the Royal College of Art. Since then Andrew has continued working primarily as a studio based artist, running other ventures alongside his practise, like the Carnie Chaple Gallery, the Tram Depot Gallery, and working as a consultant for Greater London Arts. Currently he is very involved in the Art and Mind Festival and other ventures in Winchester while continuing with his own practise, which is primarily in time based work, themed around various scientific topics, he also likes to work with a groups on art based projects, and is teaching regularly at the Winchester School of Art, which he has done since 1991.