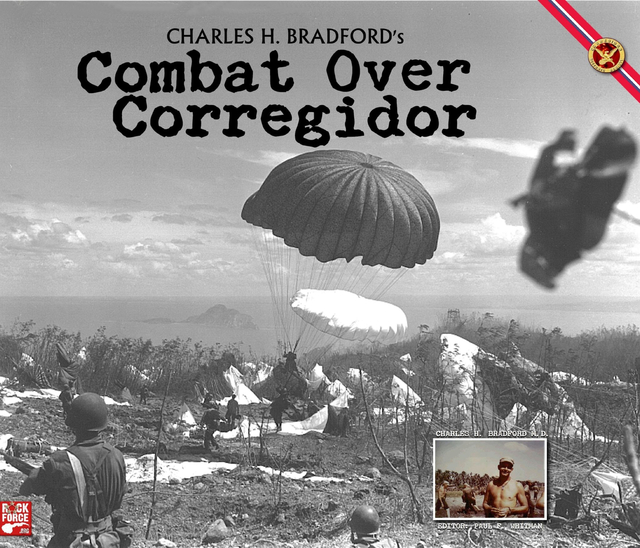 "Combat Over Corregidor" is a tribute to the humanity, camaraderie, teamwork and strength of purpose of the ordinary American citizen soldier on Corregidor rather than a sequential retelling of individual battles on a distantly relevant Philippine battlefield. Charlie Bradford (he was uncomfortable with "Doc") was a surgeon in the Second Battalion, 503rd Parachute Infantry Regiment, and a valuable member of the "Rock Force" when it retook Corregidor in one of the most dangerous airborne envelopments of World War II. "Wherever you were, you could turn around and Charlie would be there," one veteran later commented. It was a life defining moment for all of them. Throughout his life, though, Charlie would talk little of it. "I never get to talk to people about the 503rd. Unless they were there, who could I tell all this to? They'd never know what I'm talking about," he confided to John Lindgren, another notable 503d personality of WWII. During the immediate months after Corregidor Charlie completed a private manuscript of his own experiences, and of what he heard first hand. It reflects the attitudes and language of the era. He remained reticent concerning the publication of his manuscript beyond the ranks of the 503d PRCT, though he allowed it to be used as an "Anonymous" reference source by those writing of Corregidor. This manuscript remained a dog-eared insider's secret for over fifty years, but it should now take its crucial place in the 503d PRCT's History and Heritage. The men of the 503d PRCT, who have not always been entirely happy with what outsiders write, quietly defer to Charlie's manuscript as the closest to the reality of Corregidor, " Corregidor before the scenario writers made comic-strip heroes out of the real men who fought there." The manuscript is now published in its entirety, together with identifying notes of the individuals involved, so far they have not been lost in time.