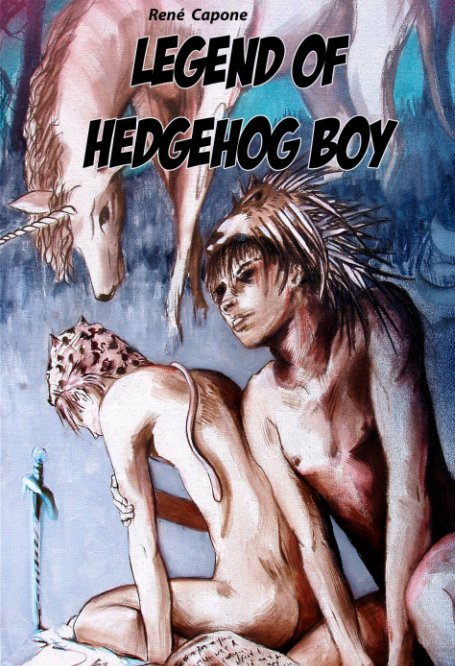 From the beginning, Hedgehog Boy was far more than a simple queer fairytale: it’s use of such a heavy topic as child abuse and it’s consequences, both physical and psychological, marked it as a well-thought form of therapy. Contrary to historical fairy tales, which usually showed kids the dangers of straying from the “normal” path that society had agreed upon, Capone’s story argues for self-expression, reconstruction after traumatic events and the building of a chosen family. These themes should, it seems to me, resonate one way or another with every queer adult. In fact, Capone subverts the usual goal of fairy tales in various ways, as for example with his portrayal of Frank, the angry teddy bear: Frank’s role would normally be that of the conscience voice, the calming, moral side of the boy. Instead, we get a fierce warrior who’d reduce Jiminy Cricket to road kill in an instant.

With The Legend of Hedgehog writer and artist Rene Capone, conjures up all of the classic children’s tales of young and lost souls fleeing into their imaginations in order to escape the cold, harsh nature of reality. And like Peter, Alice, and Dorothy before him, we’re presented with a brash and courageous hero who doesn’t submit to torment and strives to find freedom and happiness despite the predominant darkness of his past.

Capone doesn’t shrink from his responsibilities as storyteller, and as Kitty says, “In all the greatest books, someone always gets rescued”. The question, of course, is who does the rescuing, and who’s rescued.