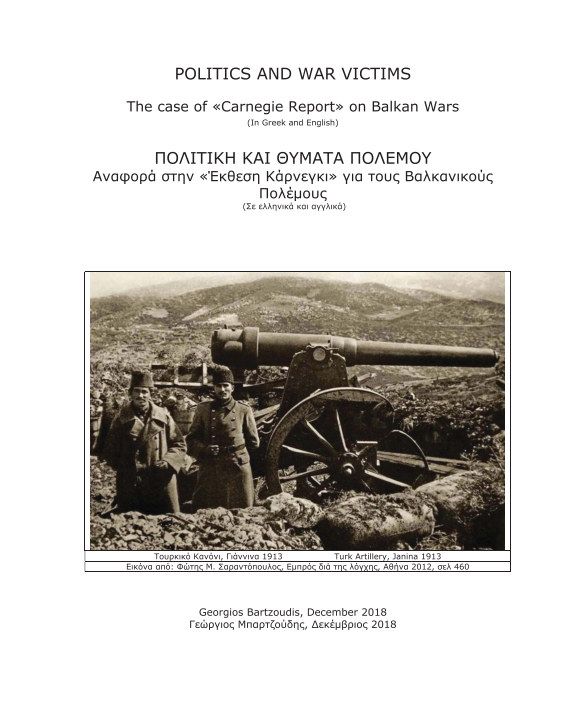 POLITICS AND WAR VICTIMS, The case of «Carnegie Report» on Balkan Wars

The 400 pages of the book reveal and denounce significant propaganda attacks against Greek Macedonia, from 1913 until today. «Carnegie Report» on Balkan Wars, is used as a tool for these attacks. The «misleading and farcical» text of this «Report», according a characterization formulated in 1914 by the Greek Chargé d' Affaires in Washington, had from its creation, specific political aims.
Here is a little background that led to drafting of this Report: In 1912, the Balkan states co-opposed the Ottoman Empire. In the autumn of the same year, the First Balkan War broke out, during which Ottoman Turkey was expelled from its occupations of Balkan Peninsula (Kosovo, Macedonia, Thrace). However, the allied states disagreed on the partition. That is why in June 1913 the 2nd Balkan War broke out (Bulgaria vs Greece and Serbia) which ended with Treaty of Bucharest.
Before the end of the war, the «Carnegie Endowment for International Peace» funded the drafting of a text, with the title «Report of the International Commission on the Investigation of the Causes and Methods of Conduct of the Balkan Wars».
The real purpose of this intervention was to promote American influence in the Balkans, an action that favored the times: The winners of the Second Balkan War, Greece and Serbia, as well as Romania (even Turkey), were satisfied with the good neutrality of the great European powers. At the other hand, Bulgaria seemed to have been left without ... protectors. Thus, for USA, a great opportunity came up for a political penetration in the Balkans, by approaching the displeasured Bulgaria. «Carnegie Report», published in summer of 1914, was intended as a tool to achieve this goal. But also, the «Carnegie Endowment» used the «Report», again for political penetration in Bulgaria, by re-publishing it in 1993, after collapse of the Communist regimes of Eastern Europe. Also in 1995, the «Endowment» translated and published the Report in Bulgarian. The propaganda is continued until today

As Agronomist-Specialist in Land Reclamation, I have managed Public Services, as well as Private Business. During this career, I have written some papers for Hydraulic Works of East Macedonia, not only on technical level but also on their history (from 1925 until todays). Being a genuine Greek Macedonian, I have turned my interest wholly to the history, during the last thirteen years. In 2015 my first historic book was edited: «The Liberation of Nigrita’s District and the conflicts with Bulgarians (1912-1913)». Also I published a number of papers in internet sites, especially in academia.edu, e.g.: «Searching for the Ideology of Alexander the Great» [in Greek], «Communism and Macedonian Issue (1919-1936)» [in Greek and English] etc.