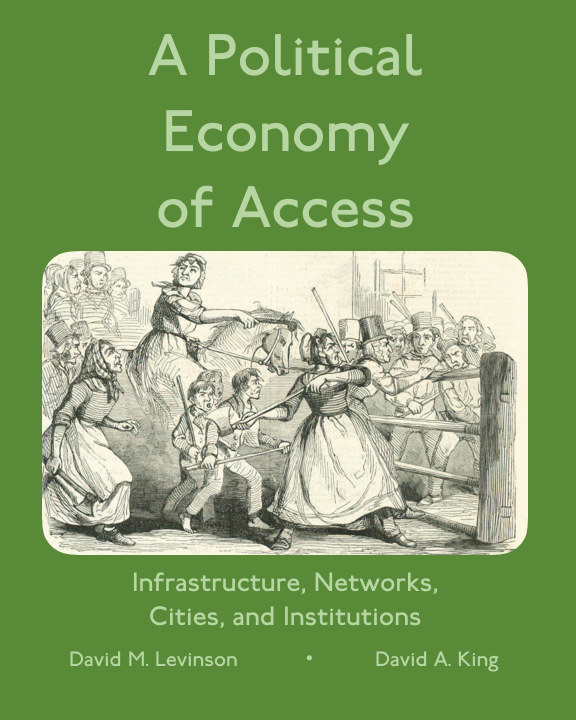 by David Levinson and David King

Why should you read another book about transport and land use? This book differs in that we won’t focus on empirical arguments – we present political arguments. We argue the political aspects of transport policy shouldn’t be assumed away or treated as a nuisance. Political choices are the core reasons our cities look and function the way they do. There is no original sin that we can undo that will lead to utopian visions of urban life.

The book begins by introducing and expanding on the idea of Accessibility. Then we proceed through several major parts: Infrastructure Preservation, Network Expansion, Cities, and Institutions. Infrastructure preservation concerns the relatively short-run issues of how to maintain and operate the existing surface transport system (roads and transit). Network expansion in contrast is a long-run problem, how to enlarge the network, or rather, why enlarging the network is now so difficult. Cities examines how we organize, regulate, and expand our cities to address the failures of transport policy, and falls into the time-frame of the very long-run, as property rights and land uses are often stickier than the concrete of the network is durable. In the part on Institutions we consider things that might at first blush appear to be short-run and malleable, are in fact very long-run. Institutions seem to outlast the infrastructure they manage.

Many of the transport and land use problems we want to solve already have technical solutions. What these problems don’t have, and what we hope to contribute, are political solutions. We expect the audience for this book to be practitioners, planners, engineers, advocates, urbanists, students of transport, and fellow academics. While we may come across as overly critical at times, we write in the spirit of improving transport and land use policy through a focus on access.
Author website
http://transportist.org

Prof. David Levinson teaches at the School of Civil Engineering at the University of Sydney, where he leads the Network Design Lab and the Transport Engineering group. He is an honorary affiliate of the Institute of Transport and Logistics Studies, where he is also a member of the Board of Advice. From 1999 to 2016, he served on the faculty of the University of Minnesota where he held the Richard P. Braun/CTS Chair in Transportation (2006-2016). Levinson has authored or edited several books, including Spontaneous Access, The Transportation Experience, and Planning for Place and Plexus, as well as numerous peer reviewed articles. He is the editor of the Journal of Transport and Land Use.