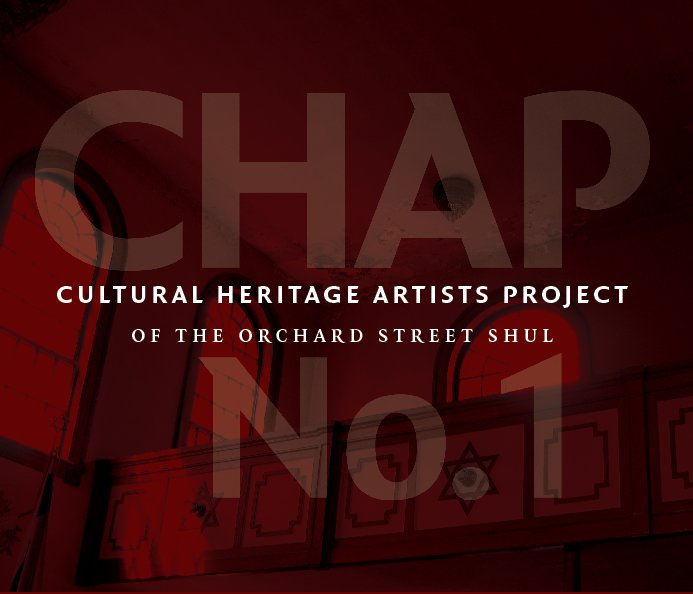 Historical narratives have a long tradition in visual art, literature, and film. These narratives serve to stir the imaginations of both the author and the audience, and, in the best examples, the works hold to the rigor of historical accuracy. The Cultural Heritage Artists Project of the Orchard Street Shul is within this tradition: a project that builds on the past and looks to the future, using the resources of art, inventive digital technology, and social networking to build a community of creative visual thinkers and researchers investigating various facets of how we document, interpret, and retell cultural legacies.

The project began simply. It began with a telephone call from Rabbi Mendy Hecht, asking if I might be interested in organizing an art exhibition as an event that might bring people to the shul. As I considered the prospect of developing the exhibition, I realized that this is a special moment in the history of the Orchard Street Shul. This is the moment just before the renovation of the shul, a time when the traces of history, the echoes of the past, are clearly evident.

The peeling paint on the ceiling, the small cracks in the walls, and the worn wood benches, all reveal the vulnerability of the building. The shul is a place that has seen history, has seen people come and go, has seen a neighborhood transformed. This moment before renovation is also a moment to be shared, a moment when the building speaks easily to a wide variety of artists who can feel the echoes of past generations in the very walls of the building.

The call to create an exhibition with the Orchard Street Shul came at a time when many of us who have spent our careers in the art world felt ready to step out of the privacy of the studio. As artists, we were already moving out of the realm of the singular vision, beyond the idea of listening only to the inner voice of the artist, without regard for the audience beyond an increasingly insular art world.

So we called a meeting. On an August afternoon in 2008, a group of artists discussed the project with Rabbi Mendy Hecht and shul president Sam Teitelman in the social hall of the shul. We agreed to move forward with the concept of developing a Cultural Heritage Artists Project, stipulating that participants must visit the shul, engage with the building, and experience the community for themselves.

Already a diverse group, we issued a call for more artists, and the group soon began to grow. Within a few months, the project expanded beyond the original idea of an installation in the shul social hall. We moved to the John Slade Ely House Center for Contemporary Art, New Haven, Connecticut, fortunate to have found a place in a respected artistic center that had a strong sense of history and dated from the same time period as the Orchard Street Shul. By April of last year, we established a group of artists with an equal balance of New Haven regional artists and artists from California, Florida, Illinois, Massachusetts, Missouri, New York, Rhode Island, and Utah. Our backgrounds, religious beliefs, and aesthetic approaches varied.

Artists researched their projects through a variety of means, including archival documentation, consultation with current and former congregants and area residents, their own photographic, video, and sound recording, and translation of original data into three-dimensional scans, as an aid in keeping cultural heritage alive.

From the beginning, this project was a group effort, a hybrid between a collaborative project and a gathering of individual contributions. The participants on the project worked independently and in small teams. Sharing digital photographs, trading stories, and exchanging ideas, participants made new friends through e-mail and an online networking site and during the large “artist” days that we held at the shul, which were frequently scheduled to accommodate the artists who traveled the farthest.

The Cultural Heritage Artists Project of the Orchard Street Shul is a project developed by working, active artists, and they still work together to keep the project growing. The artistic committee includes Nancy Austin, Jeanne Criscola, Roz Croog, Greg Garvey, Jaime Kriksciun, Mary Lesser, Suzan Shutan, Joy Wulke, and myself, Cynthia Beth Rubin. Our advisory committee includes Debbie Hesse, Lisa Link, Howard el-Yasin, Sam Teitelman, and Mendy Hecht. With this exhibition, we are taking control of art, we are saying that we do not always need big budgets and a huge institution to make art and speak to community.

Even as each artist or collaboration team took a different approach to the project, we all learned from each other. We learned to appreciate each other's insights and the differences among us. We look forward to the next phase of the project, when, having experienced the presentation of the completed works of our colleagues and the interactions with the public, we can carry this experience into new work.

An award-winning studio, Criscola Design, specializes in a wide range of media and scale including print, interaction, film and video, and environments.