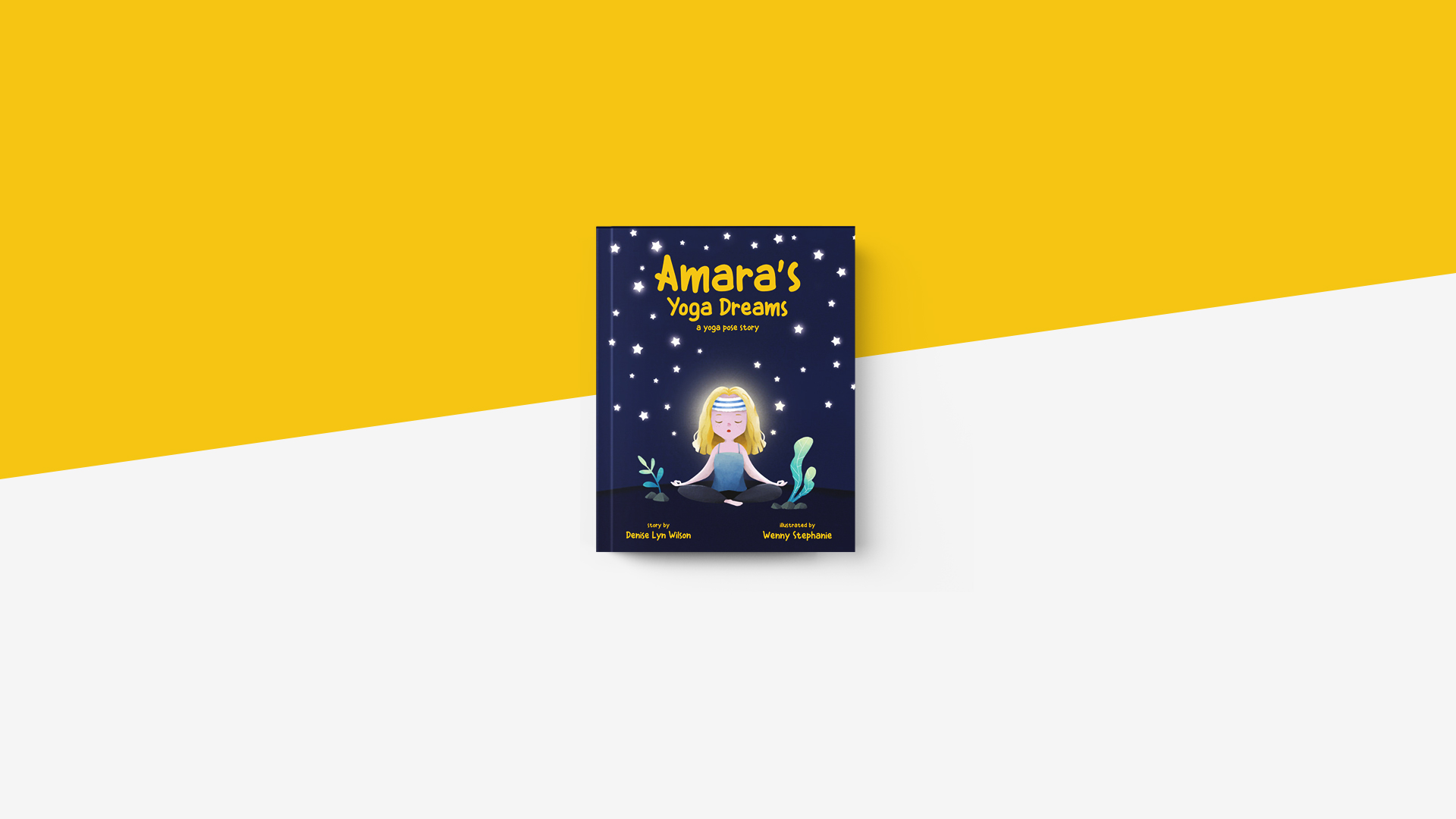 Amara’s Yoga Dreams: Behind the Book with Denise Lyn Wilson

If someone told you about a book that combined beginner yoga poses with a tale of the creation of the universe, would you picture a children’s book? Denise Lyn Wilson has created exactly that in Amara’s Yoga Dreams , a truly original project to spark curiosity and inspire young readers. Read on to discover how she brought this story to life—and her plans for the next creative project.

1. Tell us the story behind Amara’s Yoga Dreams. Why did you choose to make your book and where did the idea come from?

I have practiced yoga and meditation for many years, over which many of my students have asked me to write a book or make videos of my sessions. I often tell stories about the poses or use guided imagery when I teach but I never repeat the same vision or story twice, because I say what I feel as it happens. To preserve some of my stories, I began to journal concepts and ideas which eventually became Amara’s Yoga Dreams. The storyline evolved from my desire to revive the concept of a female creator or Goddess. Amara represents the empowerment of all girls and unlimited potential.

2. Which came first: the flow of the yoga poses or the story of Amara and Vira building the universe together?

The story and the poses are intertwined. I started with a seated yoga pose, symbolizing life before creation, and coupled that with the yoga concept of saluting the sun, which is a series of poses to bring your body and mind into enlightenment. Amara and I really had no choice but to create from darkness to light. Also, the world was long overdue for a new mythical creation story.

3. How did the characters of Amara and Vira come to life?

First, I studied some of the oldest creation stories known to man such as Aten, Brahma, Celtic and Nordic origins, and cross referenced them with different disciplines of yoga. After that I looked up different yoga terms, definitions of the poses, and the meaning of many girls’ names. I found a definition for Amara that meant “one who creates” and I took Vira from Virabhadrasana which is the Sanskrit name for all the warrior poses in yoga. Playing with light and dark, peace and war, and calm vs. chaos . . .  it was clear that the girls simply could not exist, one without the other.

4. How did you come to work with Wenny Stephanie on the illustrations? Was collaboration an important part of this project?

I found Wenny on Fiverr (an online platform for freelance artists to get work from all over the world.) She was contracted based on her illustrative style and excellent rating on the site. I provided her with the script, my own terrible stick figure drawings, and real photographs of myself executing all the yoga poses. We collaborated through text and a Dropbox system which allowed me to direct her through many revisions with commentary, suggestions, and notes. The process took over a year to complete. It may surprise you to know that we have never met or spoken in person, as it is not allowed per the rules of Fiverr.

5. How did you decide on the size, cover, and paper type for your book?

The first thing I did was a lot of research on the most popular book sizes, fonts, and layouts of the top selling children’s books. I then enlisted my best friend Michael Bernardo and my husband Breck Wilson who are both graphic designers to help me make all the technical decisions. Mike did the layout and much of the editing revisions to get us to a print ready version of the book.

6. Which tools or software did you use to create your book and why?

Adobe InDesign, Acrobat PDF, Photoshop, Illustrator and of course, Microsoft Word. My editing team needed to be able to collaborate using the same programs. Much of the work was done via email, especially during the Covid-19 Pandemic.

7. Where do you look for creative inspiration day to day?

I believe that we create our realities through our thoughts. I do not depend on exterior input or validation and have learned to trust what comes from within. Most of my inspiration comes from visions or dreams.

8. Is yoga an important part of your own daily routine?

Yes, I teach seven to ten classes a week, and walk barefoot in the grass two to three times a week to stay grounded. I live a highly active physical and metaphysical lifestyle.

9. Why did you decide to make a printed book rather than, for example, a video?

I have done YouTube videos for yoga, meditation, and Pilates for adults. When I wanted to address children, I felt that it needed to be something more permanent and tactile for them to interact with. Everybody remembers their favorite childhood books!

10. What advice would you give another author looking to design a children’s book? What do you wish you had known when you started?

Start with an outline, a working title and one sentence or a few words per chapter. Do that first and then write each thing on an index card. Write one paragraph for each card. See if the story is interesting and makes sense, then move the cards around to make the story more interesting or flow better.

I wish I knew a good literary agent before I started this quest!

11. How do you plan to incorporate your book into your teachings or share it with your community?

My plan is to self-publish on Blurb and use Facebook to promote and sell initial copies of Amara’s Yoga Dreams. I am then going to take some of the proceeds and use them to print and distribute copies to preschool and elementary schools for free. I will probably do a few fundraisers and book signings to promote my “give this book to a teacher” campaign.

12. Do you have any new creative projects in the works?

It was my original intention to make Yoga Dreams a series of three to five books. I have the second story written and the third is in outline form at this point. All three books will be narrated for Audible as well.

Where will your creative vision lead you? Start your next project today.