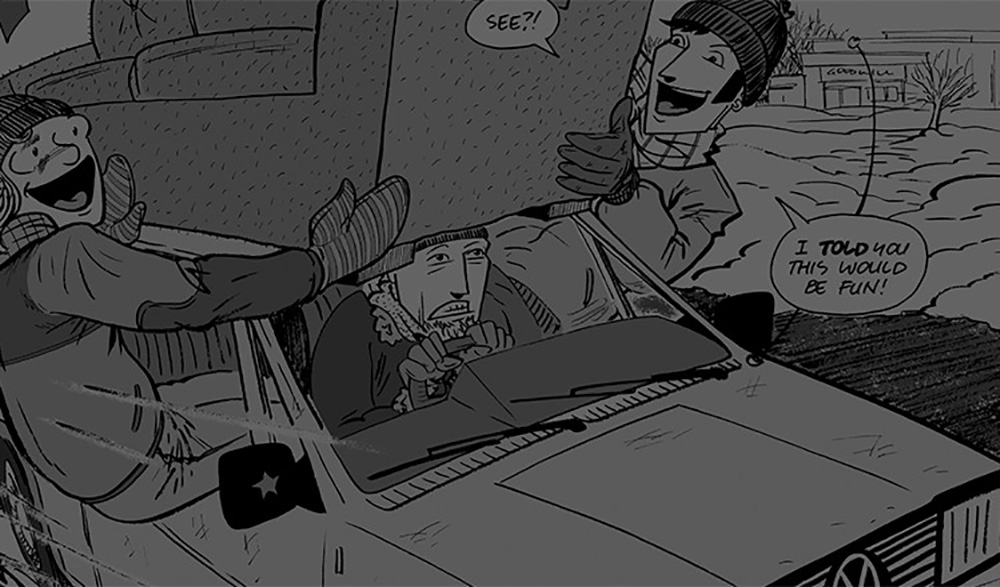 This week, we’re shining the spotlight on the graphic novel, the hybrid format that continues to gain popularity with readers and authors alike. And whose brain better to pick than that of Tyler Page: graphic novelist, educator, and blogger. He told us about his love of storytelling, where his inspiration comes from, and—for those of you who want to create your very own graphic novel—how to get started. 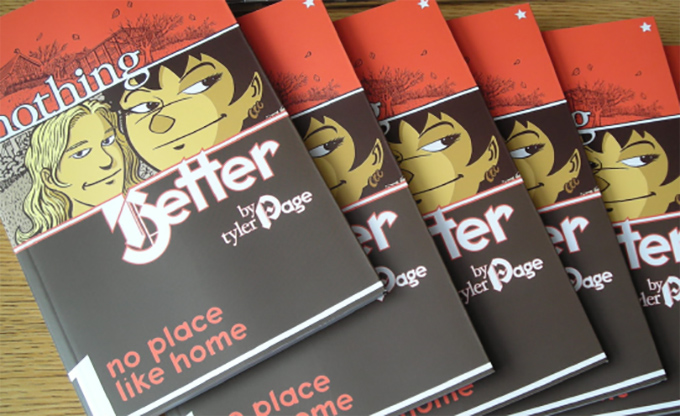 Have you always been into graphics and illustrations?

I’ve been drawing and creating since I was a little kid. The desire to start telling stories with my drawings arose pretty naturally. I played with LEGO® a lot, in addition to reading and watching lots of cartoons.

When you were younger, did you dream of being a novelist of sorts?

I definitely thought about being some kind of artist. I remember at one point thinking maybe I could be the first artist in space, as I was also very interested in the Space Shuttle program and space exploration. My parents were both artistically talented and creative people who encouraged those interests.

How did you become a graphic novelist?

I drew all the time as a kid. I read the comics in the newspapers and started making up my own comic strips, and then doing longer stories as I discovered comic books. In high school, I made friends with a group of kids who were already making their own comics and zines and getting them printed up and Kinko’s. Once I learned how to lay out and assemble a book, I was kind of hooked. It was really thrilling to be able to draw these stories and then distribute them to friends and fans.

What inspires your books?

So far, my work has mostly been inspired by real life. Though, I definitely went through a phase in high school and college where I wanted to do something fictional, in a more science-fiction vein. MyNothing Better books and comics are based on my wife’s and my experiences in college. They also reflect some of the college stories we’ve heard from our friends and family. Mostly, I want to make people think and laugh with my work. With Nothing Better I’ve tried to reflect back on the typical experiences we all have in college and focus on the big questions and issues we face at that time in our lives. So many people seem to stop learning and questioning once they’re out in the real world, and I think it’s important to put those issues and questions back in front of people.

When did you decide to self-publish—and why?

There have been a few very talented and influential self-publishers in comics: Terry Moore, Dave Sim, and Jeff Smith. Both their work, and their views on publishing, creator-ownership, and distribution really clicked with me. I liked the idea of a one-man operation. After I graduated from college, it also seemed like the best way to get my work noticed and in front of people. I didn’t want to wait for someone else to deem me worthy, I wanted to show people I already was, and here was my work on the shelves—right next to these other folks.

Did you already have a following by this point?

I had zero following. My first professional work, the Stylish Vittles series, came out of nowhere. But the nice thing about the comics world is that it’s relatively small and the barriers to entry are low. So you show up, and you keep showing up.

When I published my first book, graphic novels were just starting to become a thing. So, I decided that instead of publishing a bunch of smaller comics first, I was just going to jump right in and publish a 300-page book. It was enough to make a bit of a splash and generate some press due to the novelty. I started going to conventions and meeting other creators and retailers. Working with the comic retailers and specialty shops was one of the key things I did.

Through industry contacts, I built up a list of about 200 stores and owners and individually emailed each of them and sent them book samples, promo postcards, etc. I also participated in many of the online communities, both with other professionals as well as retailers. I developed a long list of media contacts and reviews. Some of this I learned the old-fashioned way, from some of the many self-publishing books and manuals on the market, and some of it from other creators and publishers.

Did you develop a different marketing plan for each of your books?

Not really. At the height of my self-publishing, my biggest concern was just getting the word out and getting samples in front of people to help drive sales. In many ways, I enjoyed self-publishing and learned a lot from it, as well as gaining entrance into the comics field. But it was a lot of hard work. It really wore me down. Some people have and continue to make whole careers that way. But I decided—especially as I moved on with my personal life and got married and had kids—there were other things I wanted to focus my energy on. I moved most of my publishing operation online, continuing my own comics that way, but also seeking more freelance work.

What tips do you have for other would-be graphic novelists?

As far as tips go, so much has changed in the creative field since I started—especially when it comes to comics. But the one necessary that still remains is focusing on making the comics themselves. Too many folks get so wrapped up in the details of starting a business and developing marketing plans that they forget to focus on their product. Today, publishing is as simple as putting your work up on a Tumblr or Blogger site. You can develop a following and see what works and what doesn’t. If you develop enough of an audience, they will eventually tell you what they want and can support—things like book collections or other merchandise.

Aside from creating graphic novels, how do you spend your days?

Well, since comics aren’t my full-time gig, this is an easy question; I work at an art college. I’m the Director of Print Technology Services at the Minneapolis College of Art and Design. I oversee the college’s digital printing facilities and imaging equipment. I get to work on the more technical or production-oriented aspect of comics and art. It’s actually a great mix of many things I find interesting: art, education, and technology. Not only do I get to teach kids things like what the best resolution to scan their artwork at is, or how to set up an InDesign file to print a booklet properly, but I also get to work on curriculum and policy development, and facilities management.

If you weren’t a graphic novelist, what career path would you be pursuing?

If I weren’t doing any of that stuff, I think I’d be a mechanic for a professional cycling team… or an astronaut.