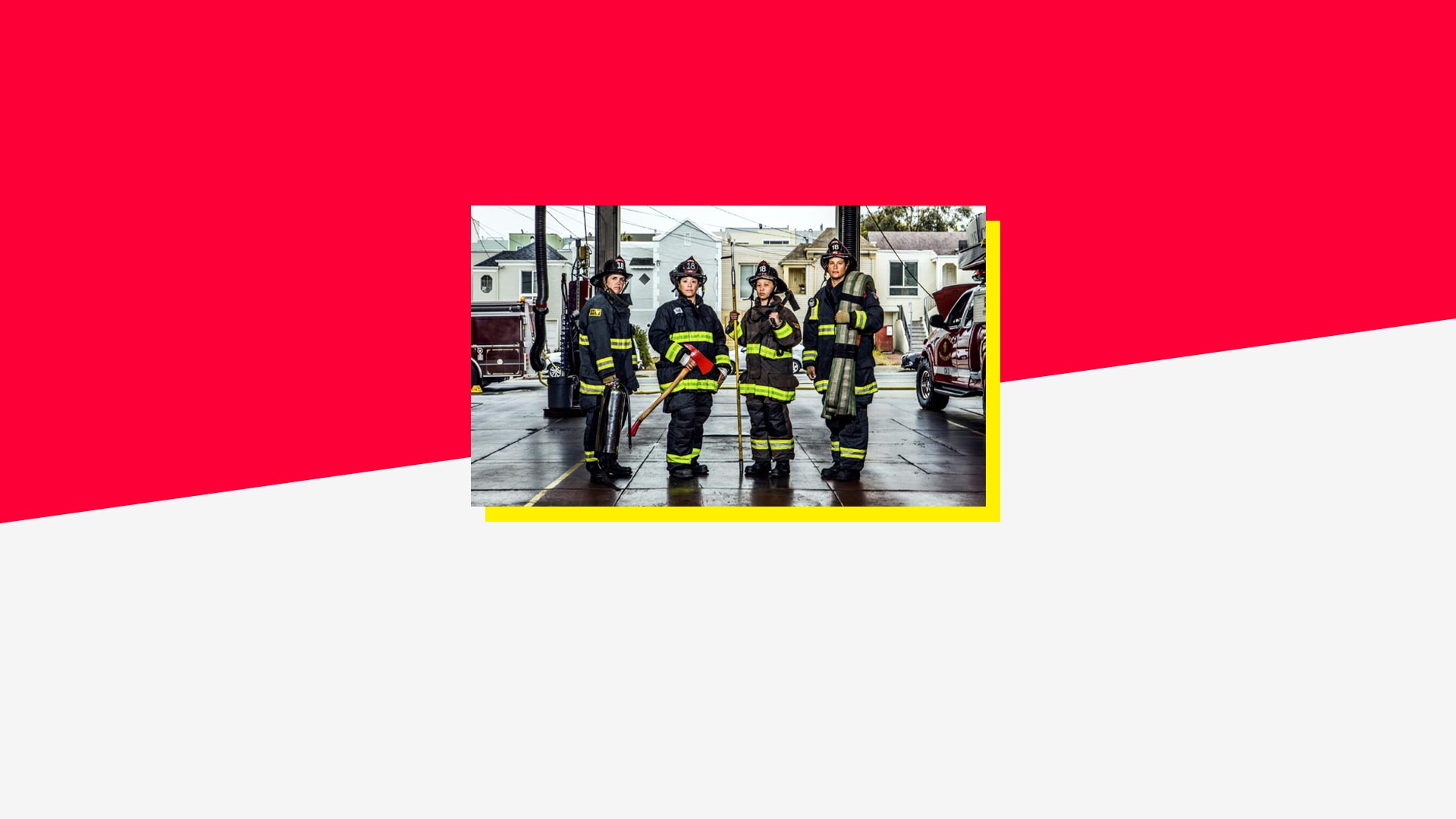 Christie Hemm Klok made a bold move—quitting her steady job as an in-house photographer at a magazine and freelancing instead. She wanted to have some control over the stories she covered and the images she made, a decision with beautiful results. From having work in the New York Times to a profound cover for San Francisco Magazine about the Sonoma County Fires, Christie has some impressive bylines. The one that caught our eye is her latest photography book project about the women in the San Francisco Fire Department. We got to talk with Christie about her work, her project, and what it takes to follow your passion. 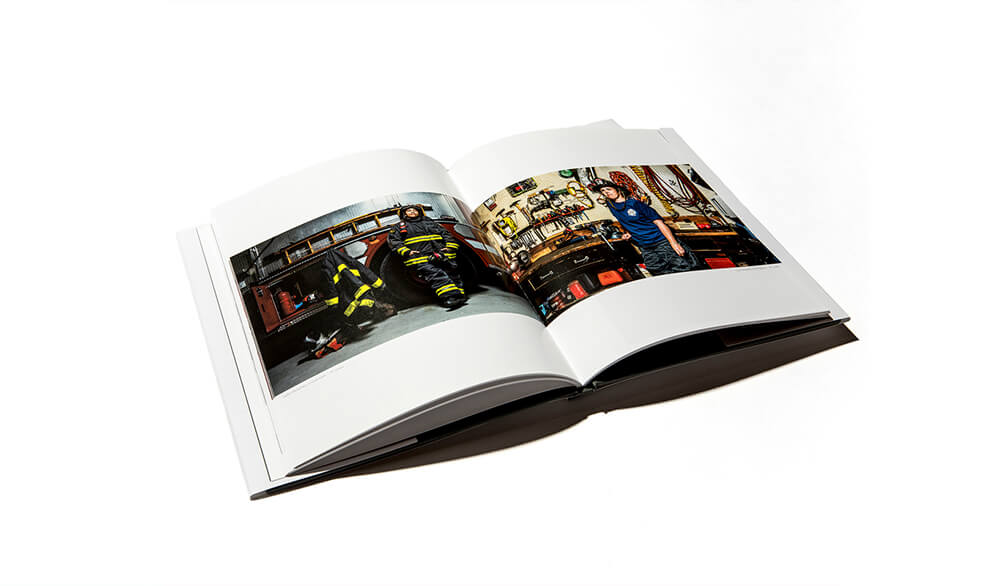 As a woman photographer in tech, shooting women in another male-dominated career, what did you notice about what it takes to succeed?

Tech still tends to be a male-dominated world, and since I cover a lot of tech, I encounter a lot of male subjects. There are definitely women in the field, just like firefighting, but the majority (in both) are men. I think photography is becoming a more inclusive profession—although it’s a long way off—and firefighting is on its way as well. Women are often falsely stereotyped as catty and competitive with one another. Sure, there is conflict and personalities that don’t mix well, but that’s people; it has nothing to do with gender. In my career, throughout my project, and in the firehouses, I experienced immense support between women. It was that support that made my project possible.

How did you decide to use Blurb for your project?

I went with Blurb to make my book for a lot of different reasons. The primary reason was my extremely tight timeline. I was shooting up until the day I designed the book, and I needed to have the book available by the 30-year Celebration of Women in the SFFD Gala. Another reason was cost. Since I wanted to publish the book myself, I had no budget to buy $1,000 worth of books up front. Also, ease of selling it was important. You can sell your book online with Blurb in the bookstore. There are so many things to take into account when you set out to make your own book, and when I started to make these decisions Blurb made sense for me. 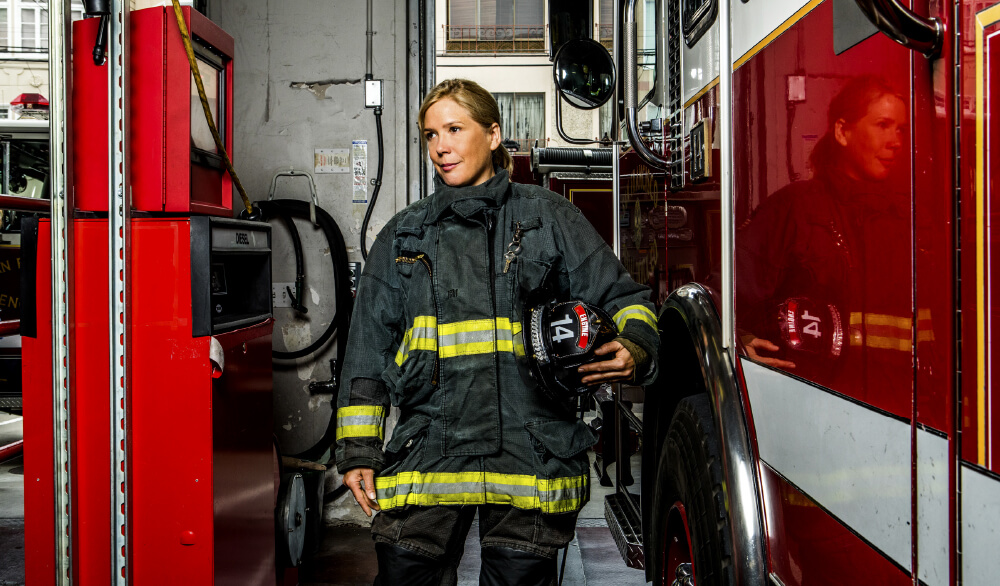 Did you design the book yourself? Which tool did you use, and what was your experience with it?

I designed the book with the help of my husband who is a graphic designer. We initially laid it out in InDesign and then uploaded a PDF for printing. It relatively was easy and made future adjustments easy as well.

How did you become a professional photographer? When did you start taking pictures, and what do you love about it?

I’ve been interested in photography since a 10th Grade photo class. But at the time, and for years after, my focus was on playing soccer. In 2003, I accepted a soccer scholarship to play in college, but after about six months, I realized it was not what I wanted to do. I dropped out and bounced around colleges and jobs for a few years. I got into photography more and ended up deciding to go to school for it. In 2010, I graduated from Art Center College of Design with a BA in Photography and set out to make a freelancing career happen. In 2013, I gave birth to my son and didn’t work in photography again until 2015. In February of 2015, I took a job at WIRED, as an in-house photographer and photo editor. I was able to sharpen my skills as a shooter and learn a lot about the photography industry. With those skills, I set back out in a freelance career in August of 2016. Since then I have worked on my personal project as well as built up a solid clientele. Sometimes I’m headed to a shoot, and I can’t believe how lucky I am to do what I do. Making photos for a living is a dream come true. I am almost never in the same place twice, unless it’s a firehouse of course, and I get to meet people from all walks of life. For me, there really isn’t a better career option. 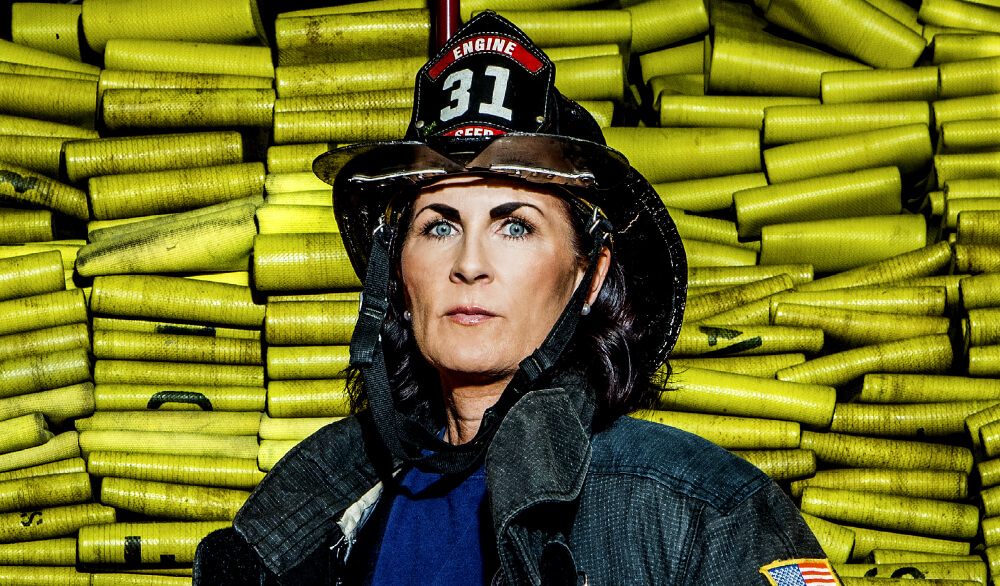 Following your passion is often unattainable to those without the privilege of support. Everyone has dreams, but it’s usually only a select few who have the means to make them a reality. I think it’s almost impossible to do it all on your own. My advice is to build a community around yourself. Find people who believe in you and will help you along the way. Whether it be advice, or even help with rent while you make work of your own. Photography—even art in general—can feel like a solitary mission, but it’s not. I would not be where I am in my career without my partner, my family, and my friends.

If you could go back and talk to your 5-years-ago-self about your creative business and work, what would say?

If I could go back and talk to my 5-years-ago-self I wouldn’t change much. I wouldn’t even tell myself that, after giving birth and staying home for two years, I would still have a career in photography. The unknown is what drives me. You have to keep moving forward and making things happen, even if you really feel like there is no hope (and I definitely did a one point). I guess the one thing I would say is to have confidence in your work and your voice. Your individuality and your personal experiences are what set you apart from others. Embrace them.

When you were a small child, what did you want to be when you grew up? How does what you’re doing now compare?

When I was about 11, I enlisted all the kids in my neighborhood to make a newspaper. There was an art department and writers. I, of course, was the boss, or Editor-in-Chief I would later learn to call it. We reported on neighborhood news, although I can’t remember anything specifically. We sold a newspaper to mostly everyone on our street at a cost of $5. In 1996, that was a ridiculous amount for a newspaper, it still is! I remember one woman saying that was more than her monthly subscription to the Times, but the neighbors caved and we made a decent profit. I remember splitting the money evenly and saving for the ice cream man. I don’t know if we made more than two issues, but I remember loving it, running around and telling peoples’ stories. Not a lot has changed. 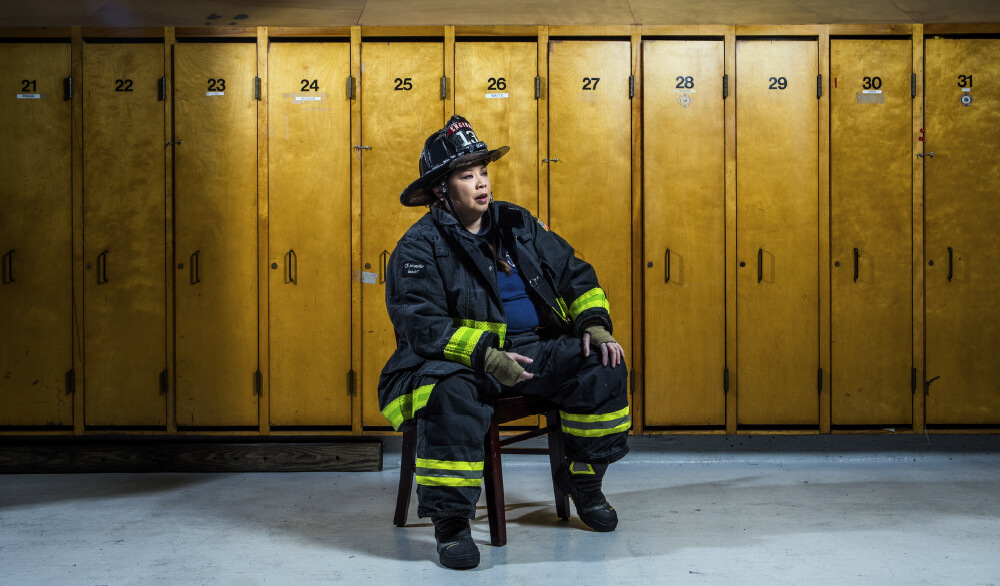 When you’re setting out to do a project, you have to take into consideration your audience. Some people prefer passing around an article online, and some people prefer to flip through printed pages. In my case, I knew the people I was photographing and the people who would be interested in the project would appreciate both. When I approached the SFFD about doing my project, telling them I planned on making a book gave it a legitimacy that it might not have had otherwise. It also was easier for them to imagine the final outcome and what they were taking part in. I think digital is great, but when you work on a long-term project that you’re really passionate about, I don’t think anything beats print.

What are the best parts of your job? What are some of your challenges?

The best parts of my job are the places I get to go. I’m all over the place, and after working in an office for a while, I really appreciate the freedom that comes with that. Unfortunately, the biggest challenge is getting paid. It’s an issue that exists for all freelancers, and frankly, it sucks. You have to be extremely proactive and on top of payments and sometimes it still takes six months to see your check. 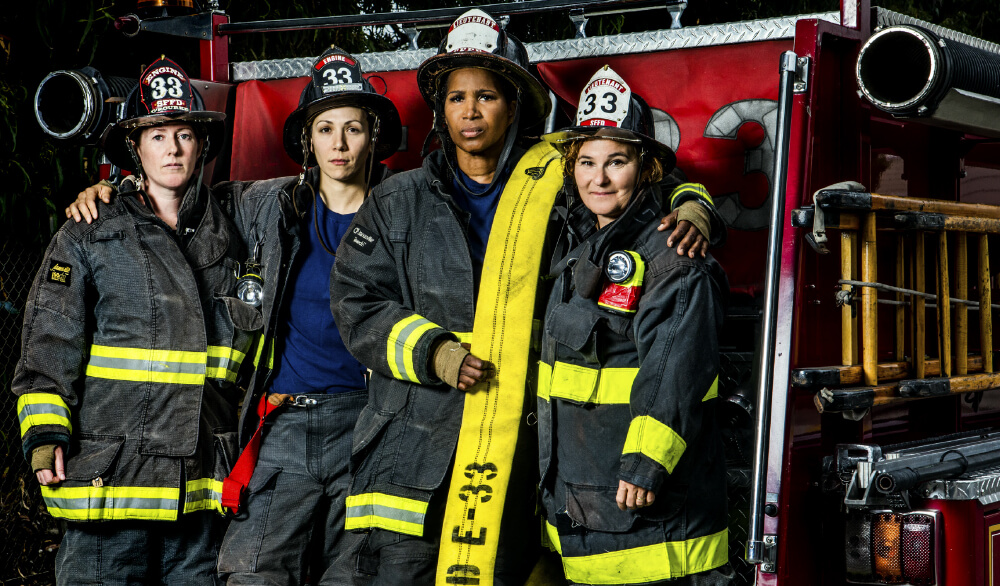 What inspired you to take on this project and make a book?

Seeing women on trucks working around the city was what inspired me to attempt this project. I wanted to do something that I would be really passionate about and I wanted to focus on women. I couldn’t have asked for a better community to get to know and more inspiring stories to tell.

You do so much work with portraits–why portraits?

I have always naturally been drawn towards portraits. I find them to be one of the more interesting areas of photography. It’s so interesting to me to see how people react in front of the camera. Sometimes I am completely blown away by someone’s ease and calm while I’m photographing them. I really get to know the people I shoot, and I think that’s a gratifying way to make a living. I took portraits of these women because I wanted to put a different face to the term “firefighter”. I’ve got a four-year-old son and he has about 7 books about firefighters. It’s rare to see a person of color, and especially a woman, in any of those books. It’s time for that to change.

What’s one project you’re dying to do?

Honestly, this one, and it’s not over yet. We start shooting for the second edition in January. 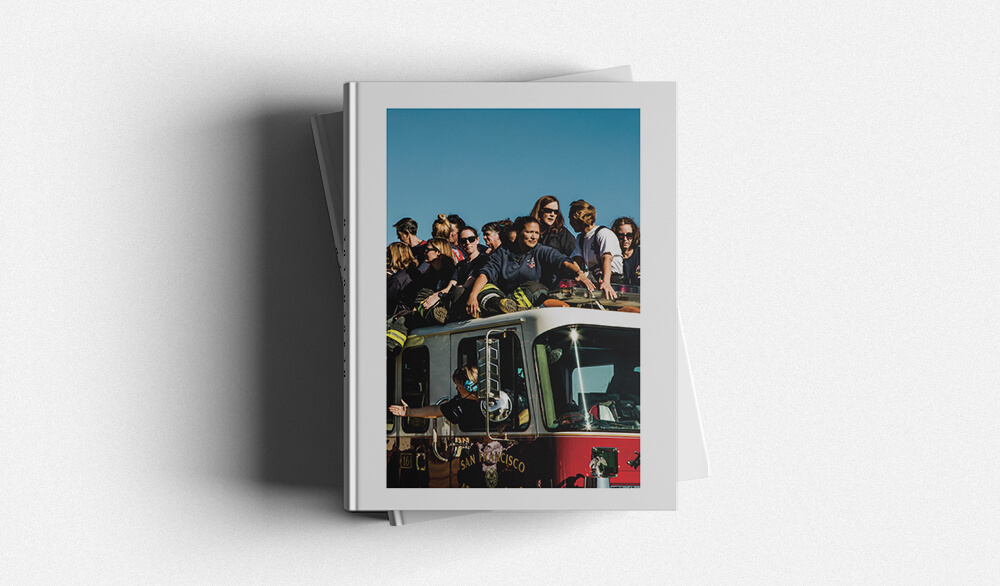 Thanks, Christie, for taking the time to talk with us. We can’t wait to see your second edition. What’s one project you’re dying to make? Share it in the comments below!