Home » Ideas & Examples » Behind the Book with Kike Calvo: The Adventures of Pili 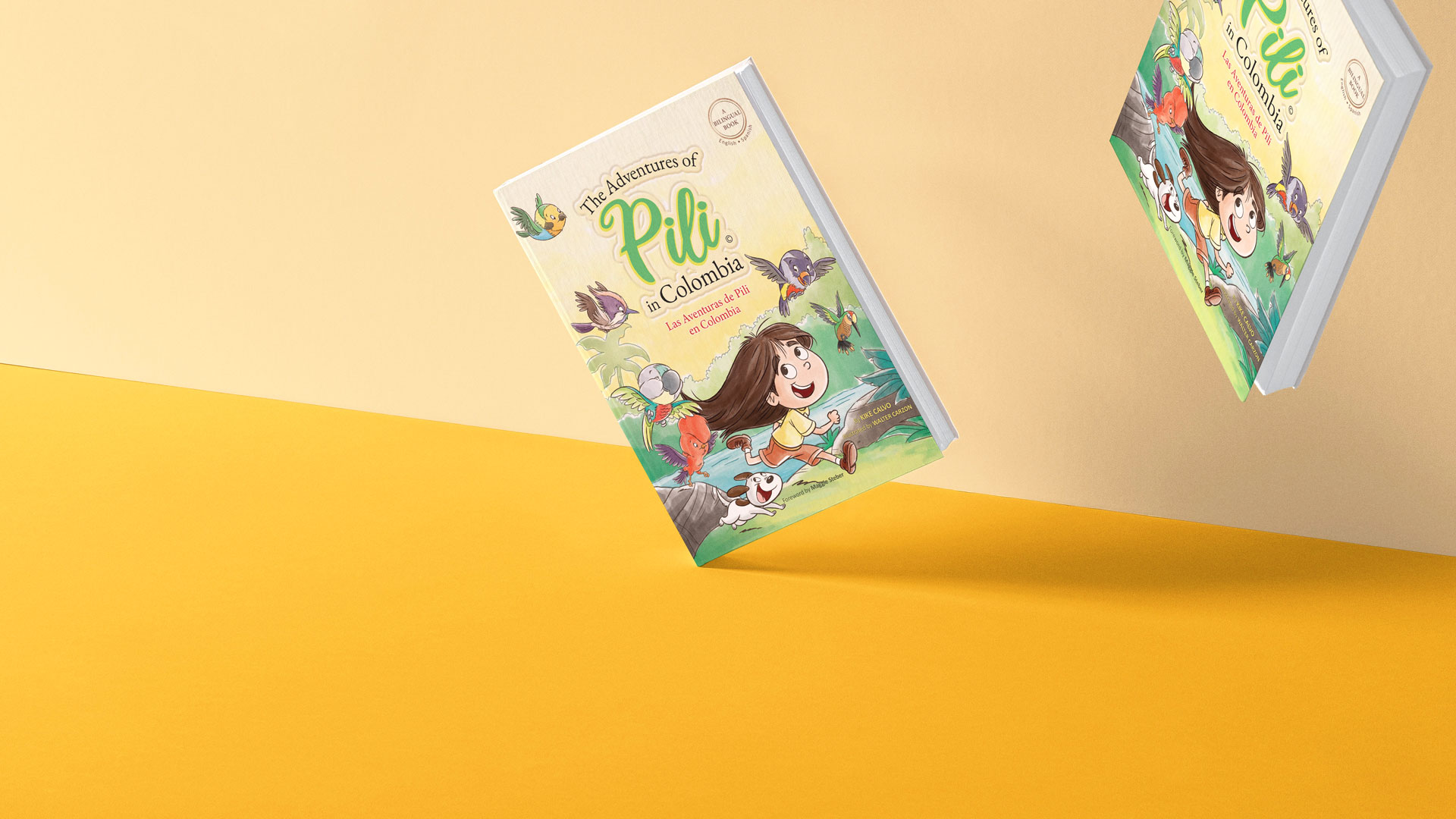 Behind the Book with Kike Calvo: The Adventures of Pili

A lot has happened in the two years since our last chat with National Geographic photographer and children’s book author Kike Calvo. We caught up with Calvo to discuss his multilingual series, The Adventures of Pili, and how having his daughter as his muse nurtured his own career and family for generations to come. Like his work? Follow Kike on Instagram, Facebook, and YouTube.

Your mission is a large one: to create books that will increase children’s awareness of global environmental issues and foster multilingual literacy. Four years into your project, how are you doing with this mission? What has changed since you last talked to Blurb?

It all began with a dream. Inspired by my daughter Pili (Pilar), I started to think about the concept of legacy. What will be my contribution to this world, beyond my own family? That first bilingual book, The Adventures of Pili in New York, represented the beginning of an obsession. The project grew, and there are now many books, including versions in non-commercial languages such as Swahili and Afrikaan, on top of the more conventional ones, such as Arabic, French, German, and Chinese.

These topics can be hard even for adults to talk about—how have the conversations with children gone? What part do the books play in encouraging these discussions?

All our books are always bilingual. Even the coloring books. And we always choose topics that we believe are important and relevant in a kid’s education process. Topics that we believe should be addressed at an early age, by parents, grandparents, or teachers, to plant the seeds of positivity and action beyond oneself.

Partnerships are such a huge part of your work. How have you found and worked with your collaborators?

In this project, I have partnered with a myriad of organizations, NGOs, and volunteers. I have given keynote presentations in different venues around the world, sharing insights into the project and how it all came to be. I’m driven by passion and creativity, always with a vision in mind. The most recent presentation was at Los Altos in California.

What I can say is that The Adventures of Pili has become part of my family life and a regular companion on my trips around the world. It would be fair to say that the global professional network I created over the years as a professional photographer and creator has been pulled from this project. But as time has passed, the project itself has nurtured my own career, opening many new doors.

Serialized content is often a great way to get a larger readership—for all books in a series. Did you always know The Adventures of Pili would be such a large project with so many books? Was expansion into video and music always part of the plan?

Since the very beginning, it was all conceived as a brand. There was lots of thinking put into the main character and into all the elements that defined the series: a female character, able to do what any boy will do and more. [Pili is] a girl of Spanish origin, fully aware of cultures and environmental issues at a young age; Curious and always willing to help; a healthy eater; [able to] befriend indigenous people and locals from around the world; passionate about art, books, and exploration; regularly traveling the world with her dad, a photographer; an explorer of deep values, with immense respect for all creatures, ecosystems, and traditions.

So to answer your initial question, yes, since the conceptualizing of the first book, we did extensive work defining what the character would be and what the series could become.

Both the video and the music portions of the equation came as a result of the pandemic. I was working overseas on a ship when all borders started shutting down. We were living in Colombia back then. It resulted in the family being transplanted to the U.S. again in a place that we never thought of as a possibility.

Not being able to travel as I used to, my neurons produced an overflow of ideas that materialized in many projects, including multiple books. Around the same time, I started a YouTube channel with the intention of finding a space to share inspiring stories around the world and to motivate people to learn and care about the planet we live in. It is still small, but we have surpassed 1,350K views and will soon have 14,000 subscribers. It is a visual lab where I am able to share ideas. For some time now, my favorite content is the live interviews I conducted both in English and Spanish. The idea brings highly accomplished professionals in fields such as exploration, archeology, anthropology, science, or music, to mention a few, to talk about creativity and life lessons. I invite the readers to check my live programs Reflections with an Accent and Por Los Caminos del Viento.

When we were able to return and explore the world, I thought how beautiful it would be to create mini-video episodes showcasing the real-life Pili, exploring locations such as the New York Aquarium or the Bronx Zoo.

As for the music portion of the equation, I have to admit it was a random discovery. We bought a piano for Pili, and we both started taking online lessons. I was so much into the discovery of a new craft, that I started hearing a song in my head every day. It became so recurrent that I decided to record the melody while attempting to play it with one finger. Lacking the necessary skills, I embarked on the process of learning basic music theory to be able to transcribe the melody into a simple one. I created a simple video to explain this process. It all turned out to be my one and only song that was meant to bring awareness to the project. Working with Italian Musician Enzo de Rosa, we adapted the original melody into an elaborated seven-minute piece for piano, cello, and violin.

How have you marketed your books? What have been the most successful moments and the biggest challenges?

There have been many special moments. When a renowned Arabic museum chose one of our books for their storytime, and also when people that I admired agreed to write the forewords of some of our books, including Emeritus Curator Brian Boom of the New York Botanical Garden, New York Times bestselling author Carl Safina, and the late National Geographic Explorer at Large and Professor Thomas E. Lovejoy.

For us, the biggest challenge is the production cost. The convenience of the Blurb system is the best, but the pricing scheme of on-demand books creates an additional hurdle to jump if one pretends to compete with big publishing houses. The answer will probably rest in offering a clearly defined product with an easily identifiable brand that readers are willing to buy if it falls in what they believe is important to them.

You are a photographer and National Geographic explorer. How does your work in photojournalism influence your work as a children’s book author?

My job as a National Geographic photographer on expeditions around the world has fully shaped who I am now, from the inside out. Being exposed to the wonders of this planet on a regular basis, but most importantly, witnessing the struggles of humanity with maintaining biodiversity and cultural diversity, is a permanent learning process. All my books, in one way or another, incorporate the National Geographic Learning Framework, and I purposely became a National Geographic Certified Educator to enhance my knowledge in the educational arena.

Tell us about Pilar now. Does she love seeing her adventures inspire children around the globe?

Pili, as we called her, has grown up surrounded by books. She has been fully immersed in the process of all the books, from the conception to the potential new ideas. Her fascination with reading surpasses what I had envisioned, and at the age of 7, she read each of the first Harry Potter books in less than a day. As a parent, The Adventures of Pili brought to our household, not only a project to dream about, but a connection with books and storytelling that will forever permeate my family. From a very early age, we took the multidisciplinary and multilingual approach in her education, and at such a young age, she is comfortable in English, Spanish, French, and Chinese. The real Pili has come to be as interesting as the one we see in the pages of our books.

Anything else you’d like us to know that we didn’t ask?

Yes, I would like to add that Pili will soon publish her first bilingual children’s book. And her topic of choice: deforestation. Books in progress include Wildlife of Madagascar, a joint project with the ValBio Centre and foreword by Dr. Patricia Wright; and two books with Haiti National Trust and Audubon Society of Haiti.

I would also like to remind any non-published authors out there to never stop dreaming! There are many times in life when our biggest challenge is our own fear of failure. True artists don’t create to succeed, they create because that is who they are. It is common to discover that what we seek tends to be found on the other side of fear. Believe in your abilities, play smart, and every time you fall, stand up again and continue with your mission. And above all, don’t let anyone dictate what is possible. That is not for them to decide. There are many books that still need to be written, and maybe yours is one of them.

Feeling inspired to write your own book? Make yours today.