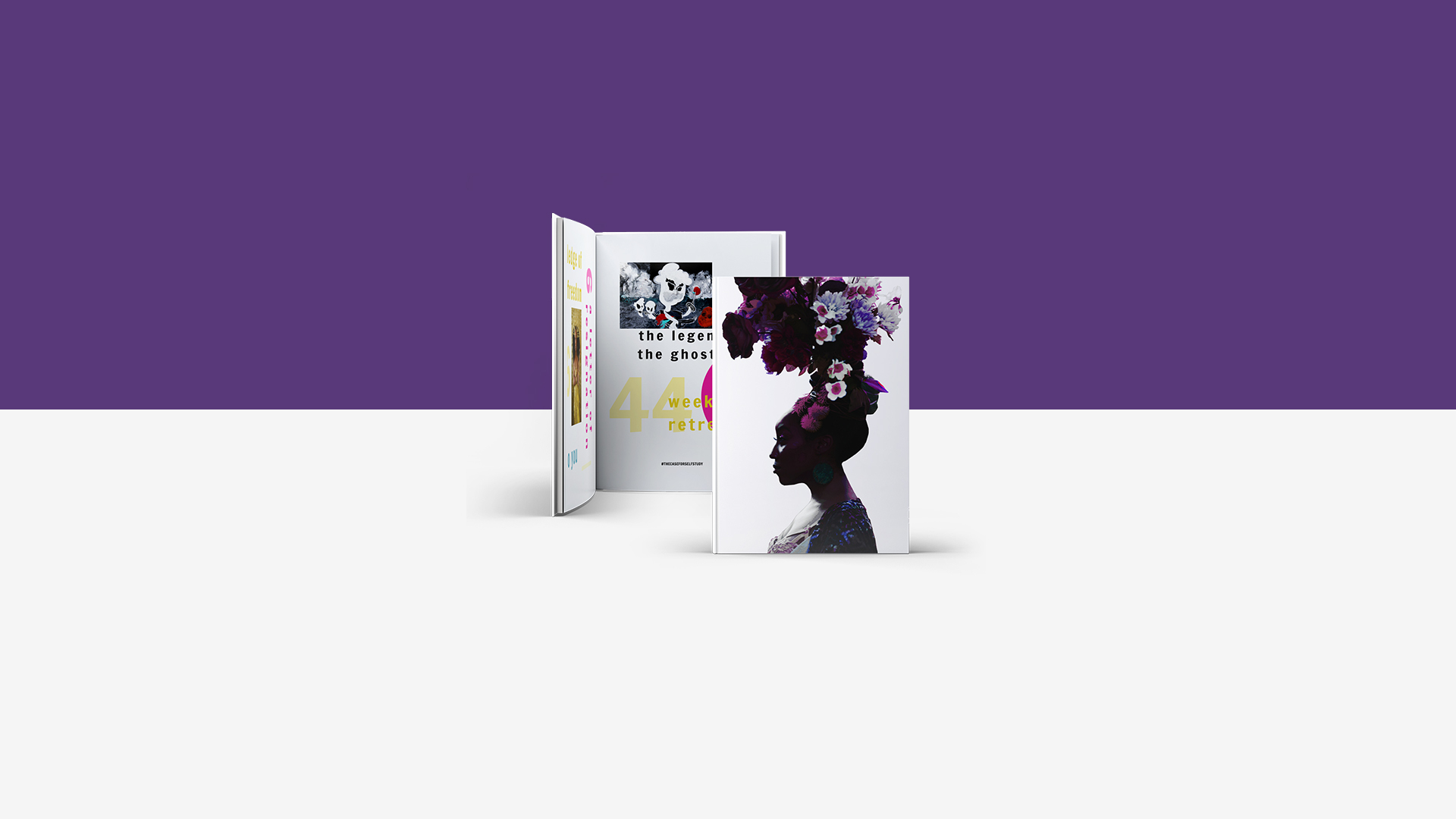 Art and Activism with J LeShaé

As soon as we saw, Born Again: An Introduction to the Case for Self-Study we knew it was something special. From the stunning design to the powerful message it contains, we had to uncover the story behind this beautiful zine with its creator, J LeShaé.

What inspired you to explore your ideas in zine format?

From girlhood to womanhood, imagination has been my favorite place. I come from a big family of storytellers who are amazingly talented at recreating past lives with colorful caricatures, dramatic reenactments, and captivating oratory illustrations. When I wasn’t listening to family griots, I was escaping to fantasylands in books, magazines, music, and the wonderful world of Disney. I have been hypnotized by the power of story and style, and have fantasized about mastering this magic since my beginnings.

In 2003, I became a racial justice activist and my attention shifted to fighting peonage in prisons, stopping voter suppression, and eliminating racism in education. I started to see my imagination as childish and art as a luxury pastime that I couldn’t afford. I did continue writing, but I focused on nonfiction essays instead of poetry and creative stories. I wasn’t conscious of what was happening to me at the time, but college was an unintentional cult of classism that inadvertently segregated the perspectives and preferences of the “educated” elite from the everyday working-class human being. Formal works of writing like scholarly articles, essays, nonfiction literature, and formally published creative works, trumped self-published, abstract, rudimentary, and independently-researched pieces. I absorbed the hegemonic values of university communities as a student and sought validation of my genius by way of proximity to the “educated” and social elite of notable literary and cultural circles. I channeled more of my energy into written works than into my visual artistry, pitching my pieces to major publications and sharing them with work colleagues. My words were often celebrated, and sometimes appropriated, by thousands of teachers and professionals across the nation; but they were only selected for print by two small publications in the span of ten years (2010 – 2020). My self-esteem was nearly obliterated.

In 2018, after 15 years of being an activist and educator, I realized that a depression/repression was quietly living in me. I was wearing dark clothes, preferring sleeping to existing, and had come to see my years of heavy drinking as simply a part of my Texan personality. I enrolled in art classes with Afro-Caribbean painter, Nicole Angelica, as a form of therapy. After 3 sessions, she encouraged me to submit works to an exhibition at the African American Museum of Dallas called #ustoo Phenomenal Women, curated by Jennifer Monet Cowley. I was surprised when I was later selected to exhibit because I had only been in art practice for a month, but the invitation was healing nonetheless. Acceptance into this extraordinary artist community felt like a rebirth of sorts after so many years of rejection with my writing. I submitted to other exhibitions and was selected for seven more shows in Dallas, New York, and San Francisco between 2019 – 2020. The Universe gifted me a renewed identity.

I revisited my written works with fresh eyes from this world where the rules of society didn’t exist. Suddenly, submitting to major publications no longer made sense to me. These messages were designed for a specific subset of eclectic radically-thinking spirit beings who are not the mainstream. Zines, therefore, were more appropriate as a medium connection to my intended community.

Zines are for rule-breakers and nonconformists… for unicorns and out-of-the-box oddballs… for free spirits and revolutionaries… And as a Black Woman exploring a unique, inconvenient, and complex life of disruption, confusion, and revelation…  As a Free Being breaking boundaries; interrupting the status quo; pioneering new thinking… An Infinite Energy inviting conversation about decolonization and freedom and self-professed divinity…

Zines are for me.

How did the process of curating and designing your zine compare to other creative projects? How important was collaboration to this project?

Whether I’m designing and selecting artworks for an exhibition; combining video clips, music, and oration into a short film; or crafting a visual journey into a printed zine; my creative approach is generally the same for each initiative. I start by gathering every artifact that I have for a project and I hover over it for several days or weeks (or months in some cases). I evaluate the energy that each item evokes in me and sort according to my reaction. The pieces that spark the most activity in me are force-ranked into a temporary hierarchy. Then I intuit a sequence using the visual elements as anchors to the overarching narrative.

The primary objective of this zine series is to promote self-study, which is a practice that extends beyond investigation of the mind and spirit, to the human form. The pictures of me in the zine are a visual study from the photographer-genius, Krystal René. Of all of the photographers that I’ve had the privilege to work with, Krystal has the strongest intuition. She’s a spiritual scientist who sees the unspoken and captures the soul. Her photos always feel more like mirrors than images and are so fundamental to this project that Born Again in fact could not exist without her contributions.

The works of visual artist, Quel Hynson, are featured alongside the story “The Legend of the GhostMan.” I shared the poem with her and asked her to illustrate her reactions, making her work a representation of self-study in relation to society. The violent interplay of black, red, white, and gray in the illustration of the GhostMan, juxtaposed against the smooth strokes of vibrant yellows, reds, blues, and greens of the Sun People, seem to scream subconscious truths about the state of the human condition she has witnessed. Her artistic interpretation is absolutely magnificent, and is by far the most progressive element in the project.

It could be easy to assume that the philosophy of self-study translates into a form of fierce individuality, but that is simply untrue. Life has taught me that it is impossible to know oneself without the compliment and contrast of the other. The collaboration with Krystal and Quel kept Born Again accountable to this universal truth, allowing the self to perform as plural and multifaceted.

How would you describe the relationship between art and activism?

In my world, art is the language of the spirit; freedom is where the spirit lives, and activism is the embodiment of it all.

My art is activism.  I use visual journals to counter patriarchal and colonialist misrepresentations of history.  I use language to take ownership of definitions and identity.

My activism is art.  It is organic, unplanned, and intuitive. It is colorful and calculated and has a signature style that no one else can mimic.

I dare say art and activism are synonymous.  I struggle to think of a form of art across the entirety of human existence that hasn’t been transformative in some regard. Even works that exist simply to annoy the general public are an expression of the creator’s quest for, or demonstration of, freedom.

Art is (the pursuit of) freedom.

Activism is (the pursuit of) freedom.

What advice would you give another artist who is thinking about creating a zine series?

The only “right way” is your way.

And if you feel hesitant and find yourself wondering if anyone would care to read them, or if you’d be rejected, or ridiculed, focus on the one person who is looking for the words you are holding in your soul.

And if you need more inspiration, read Mary Helen Washington’s forward to Zora Neale Hurston’s masterpiece, Their Eyes Were Watching God. It is a beautiful reminder that sometimes we may just be ahead of our time.