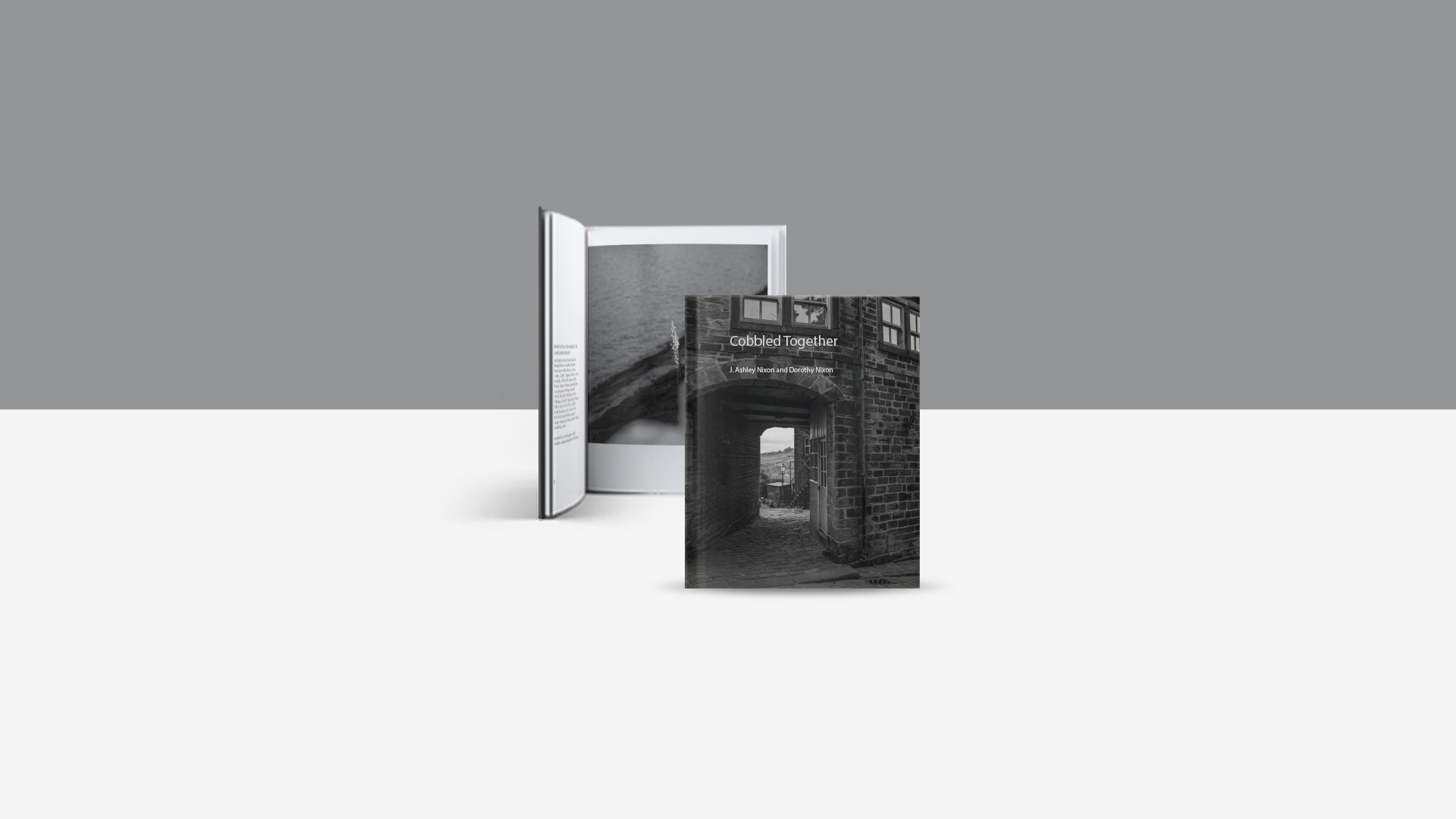 A Family Project: Cobbled Together

Documenting the world around him through photography is second nature to J. Ashley Nixon. From developing communities in Peru to music festivals in Canada, he has a knack for telling visual stories. So we were excited to discover Cobbled Together, in which he pairs photography from his mother’s hometown of Haworth, with her collection of poems, written as a young woman growing up in Yorkshire, England. The result is a nostalgic, evocative book—part memoir, part poetry book, part photo essay—generations in the making.

What inspired this book project?

My mother, Dorothy Nixon (née Markham), was born in Haworth in Yorkshire, England, and lived in the village for most of her life. As a young girl, she learned to play piano and used those skills for many years as a dance class and pantomime pianist.

She was also a poet, writing about local people and places known to her, often using the vernacular language, or dialect, of the West Riding. Her poems inspired me to photograph these places, such as the moors around Haworth, the reservoirs, and Top Withins, the farmhouse described in Emily Brontë’s classic novel Wuthering Heights.

My Mum is now in her nineties and resides in a care home. My plan to bring her words and my images together while she is still with us has finally come to fruition with this family photo book, Cobbled Together.

Tell us about your creative process for Cobbled Together. Why did you decide to use black and white images? How did you determine the flow and layout of your mother’s poems with your photographs?

I made the photographs for Cobbled Together during visits to Haworth between 1985 to 2016. I initially selected them to fit in with Dorothy’s words. However, I also wanted to relate visually to my childhood roots in the village and connect with the family that has grown from them.

The creative process began several years ago through the efforts of my sister, Sally. She put together the original compilation of our Mum’s poems, gathered from hand-written pages, notebooks or already typed-out sheets. (Dorothy was a medical secretary in her working life.) I curated a selection of the poems and then digitally converted my old analogue slides.

I decided to go with black and white images for several reasons. As I photographed the reservoir featured in The Navvies, I imagined the construction work in the 1920s. I could only visualize that in monochrome. The views through a ginnel (archway), down Main Street and across the graveyard to the Brontë Parsonage all reminded me of my youth spent in those places and again, black and white was right. Finally, there was the influence of two well-known and highly regarded photographers, Bill Brandt and Don McCulllin, who made photographs in Haworth in the 1940s and 1960s, respectively.

Nan Goldin has said that “the art is not photography, the art is editing”. I agree with that. Creating a narrative through the sequencing of a series of photographs is one thing I like the most about making books. In Cobbled Together, I needed to get the poems in the right order. Then came the pairing with images, achieved by creating a maquette before moving onto the digital platform, using InDesign.

Finding the right photograph to pair with a poem was sometimes a challenge, such as Dorothy’s funny poem, The Octopus. But then I realized that I had one that was just right; a picture of a metal mollusc on the Leeds-Liverpool Canal. According to some accompanying notes Dorothy wrote with this poem, it was drafted in the car as she drove past this exact location on her way home from a family visit.

For the poem Wash An Set. I didn’t have a photograph of the hairdresser or salon mentioned, so I made some fun out of a connection with a “curly permed” Yorkshire sheep, reflecting and drinking from an old bathtub.

Some of the best photography, whether it’s landscape, or portraiture, comes from intense personal connections with people and places. Sally Mann, for example, shows that so well in her work with her own family in Virginia. I wanted to show photographs of places in and around Haworth that mean something to the villagers and the thousands of people who visit there because of the Keighley & Worth Valley steam railway, the Brontë sisters, and the beautiful literary landscape of the Yorkshire moors. So, in that sense, it was rather like my other published documentary work. But it was also critically important to include people in that geographical setting. Including members of my own family was a natural choice.

A nice surprise has come from old school friends and people from Australia who have contacted me to say they were related to some of the men who worked on the reservoir one hundred years ago and named in The Navvies.

What tips would you give someone else looking to collaborate on a family project like this?

If you can find someone in your family to collaborate with, as I did with my sister Sally, it’s going to be more rewarding for you and others. There’s never too early a time to start gathering materials, be it words or images. Make notes; caption your photos! Make photos frequently and make them candid, not always posed. That way, much more of their character will come out.

Why are books an important part of your professional work?

Individual photographs, like the portraits displayed in people’s homes, are, of course, an essential part of photography and something I include in my professional work. But it’s in sequences of photos where the stories come through. I teach a university course on writing about images and communicating them together is something I particularly enjoy. I’ve got to a point where I don’t feel that I have properly closed out a photographic project unless I have produced a book.

Dorothy Nixon has lived most of her life in Haworth. She now resides in a Care Home in Bradford, Yorkshire. Several of the poems in Cobbled Together were published in local poetry anthologies and featured on BBC Radio Leeds. Dorothy’s Hiya Dortha, the last poem in the book, describes her life thus far in 28 lines.

Dr. J. Ashley Nixon was born in Keighley, then whisked a few miles up the Worth Valley to Haworth, where he lived for over twenty years. Ashley is a photographer, filmmaker, writer, and teacher at Mount Royal University, living in Calgary, Canada. He has a Ph.D. in ecology from Coventry University and is a Fellow of the Royal Canadian Geographic Society.