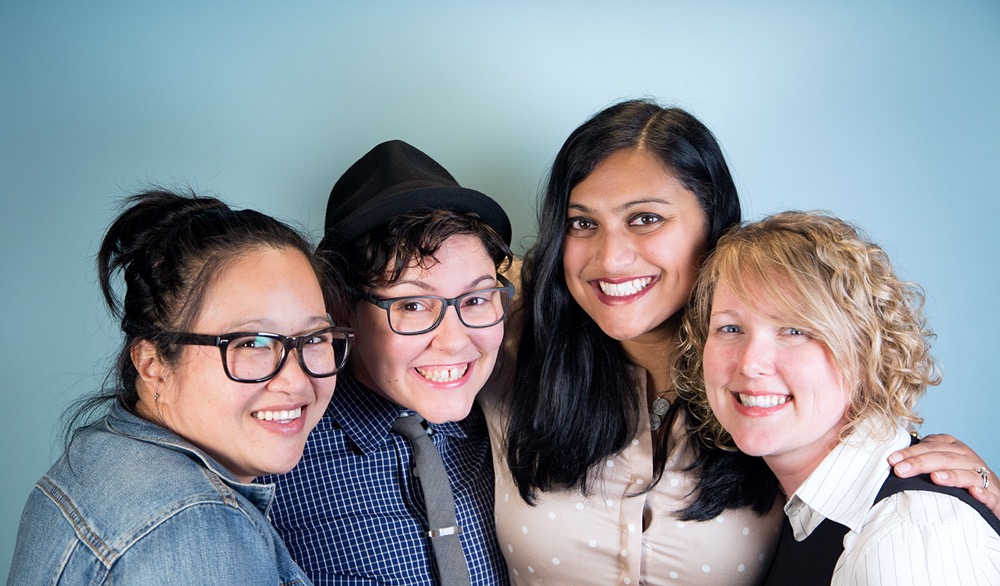 March 8 is International Women’s Day—in honor of that we bring you a post on women in leadership roles at Blurb:

When I was interviewing with Blurb, one of the first things I noticed was the high number of women in senior level roles at the company. In fact, approximately 39% of director and above level roles at Blurb are held by women. This is huge considering a recent report from law firm Fenwick & West LLP shows that women hold just 11% of executive positions at Silicon Valley companies.

During my interview process, I met with three amazing Lady Bosses who led Blurb’s marketing department, both Brand Marketing Directors and the CMO, which was a totally different experience compared to my previous tech industry interviews, where the only women I met with were the recruiters. While all three were friendly and kind, I was immediately drawn to their obvious drive and work ethic. These three women all came from different backgrounds, but all shared the common ground of working their way up in a male-dominated industry.

Within my first few months with Blurb, I discovered even more inspiring women in a variety of departments, including the Operations and Engineering departments. It was a breath of fresh air! I was lucky enough to sit down with a few of these women as they opened up about their career, life advice, and working at Blurb.

DD: When recruiters came to my school my senior year, I interviewed for every type of job in every type of field to see if there was something that struck a chord. I fell into this really interesting rotation program at a retailer called Mervyns (now defunct, but at the time it was owned by Target). The rotation program allowed you to spend time working in different areas, including planning, marketing, and buying before you made a decision on where you wanted to land. It was great for someone like me who didn’t really know what I wanted to do since it let me try different things. Eventually, it led me down a really cool path to e-commerce and marketing, but by spending time in other functions, I learned from the ground up how a business works and how all the different pieces come together.

JW: I started in a management training program at a national print company, CGX. The idea was that you spend 2-3 years in the training program, then you would be ready to go into a management or sales role based on your interests. I took a different route and followed the technology.

AP: My first job came about when I was a student in college. I was rallying the student body into some sort of half-baked protest, and one of the professors who worked at the public TV and radio station offered me a job. I helped with the film equipment and did very rudimentary motion graphics for them. Years later, my former boss told me that he offered me the job as a way to see if it would bring me into “the system.” Meaning, he wanted to see if I would protest less because I was a “part of it.” The job has never stopped me from protesting.

TS: Yes, and I am lucky enough to work with her daily!

RP: I have had several and still do—both men and women I look up to and trust—starting with my best friend and husband, Pradeep.

[big_title2]Have you ever had to establish yourself in a boys club? How?[/big_title2]

RP: I grew up in a very conservative town where we had ‘rules’ around what a girl/woman is meant to do. Fortunately for me, I had great role models in my life, including my parents, who worked in organizations that helped empower abused women and bring awareness in villages. I also had a grandmother who always pushed me hard to get the right education and strive for financial and emotional independence. This has definitely given me the power and strength to challenge the status quo. It gave me the drive to establish myself in areas that were previously considered for men, like representing my state at the National level for girls’ basketball in my teens, in spite of the challenges I faced with teasing and bullying, where sometimes it was even physical when training out in open grounds.

JW: My background is in traditional offset printing. I had to figure out how to gain the trust and respect of men who had been in the industry for more than 20 years, who also knew that I was working towards becoming their boss within a few years. Every day of my first 2 professional years was an age and gender challenge for me. Sometimes it was simple to navigate those waters, but other times I was reminded very strongly of both my age and gender. Once I showed the men I was working with that I knew was I was talking about and wasn’t going to play the “female card”, they started to respect me.

AP: Being a queer woman of color pretty much puts you into the “other” category immediately. It can be tough to be heard when you don’t necessarily have the same type of formative experiences as people in the dominant culture. There’s immediately an assumption that you are either dumb or weird, but in the end it is just people battling with their own expectations of how a person should behave. As a bicultural hybrid, I can tell you that my personality is dependent on context, and probably mixed with my own sense of anxiety when dealing with my environment.

DD: Don’t be afraid to ask questions and surround yourself with as many talented people as you can. An old co-worker told me that everyone “is the average of the 5 people you spend the most time with”, and often times, those 5 are ones you work with.

[big_title2]What advice would you give young women aspiring to be in your field?[/big_title2]

RP: Technology is not always considered the most ‘sexy’ profession and often categorized as ‘nerdy’ or ‘geeky’. It’s challenging and very interesting once you take a deep dive. Keep going and don’t give up when you hit roadblocks.

DD: Work as hard as you can, especially as you are starting off. Priorities will change throughout life. The harder you work and more you learn early in your career, the more opportunities and options you will have to choose from as you grow.

AP: Buy books instead of photocopying them.

DD: We are really fortunate to have strong women leaders who have accomplished so much in their careers. It is exciting and inspiring to watch them lead and drive important initiatives.

JW: Blurb doesn’t judge. We don’t treat women better or worse than men. We hire people that are passionate, competent, and who contribute to a supportive culture.

TS: Blurb is one of the most supportive workplaces I have ever been part of. The engineering culture of helping and teaching only makes the team and each individual engineer stronger for it. There are seriously no “dumb” questions.

AP: One of the reasons why Blurb originally caught my eye was because the company focused on diversity before diversity was even a mainstream thing. The company is founded by a woman and it has retained that alternative mindset even as it matures.

[big_title2]Do you have a favorite quote? Aspiring or funny, anything goes![/big_title2]

TS: “I never lose. I either win or learn.” –Nelson Mandela

Being around all these wonderful role models is so awe-inspiring. It also gets me thinking, “What would I tell MY 22-year-old self?” Though it doesn’t feel so long ago that I was a young twenty-something working in an advertising agency full of male bosses and older colleagues, I would tell her to take in everything! Get exposure to as many things as possible in your field. You never know where they may lead. Also, don’t be afraid to ask questions!

What Lady Boss inspires you? Tell us in the comments below!