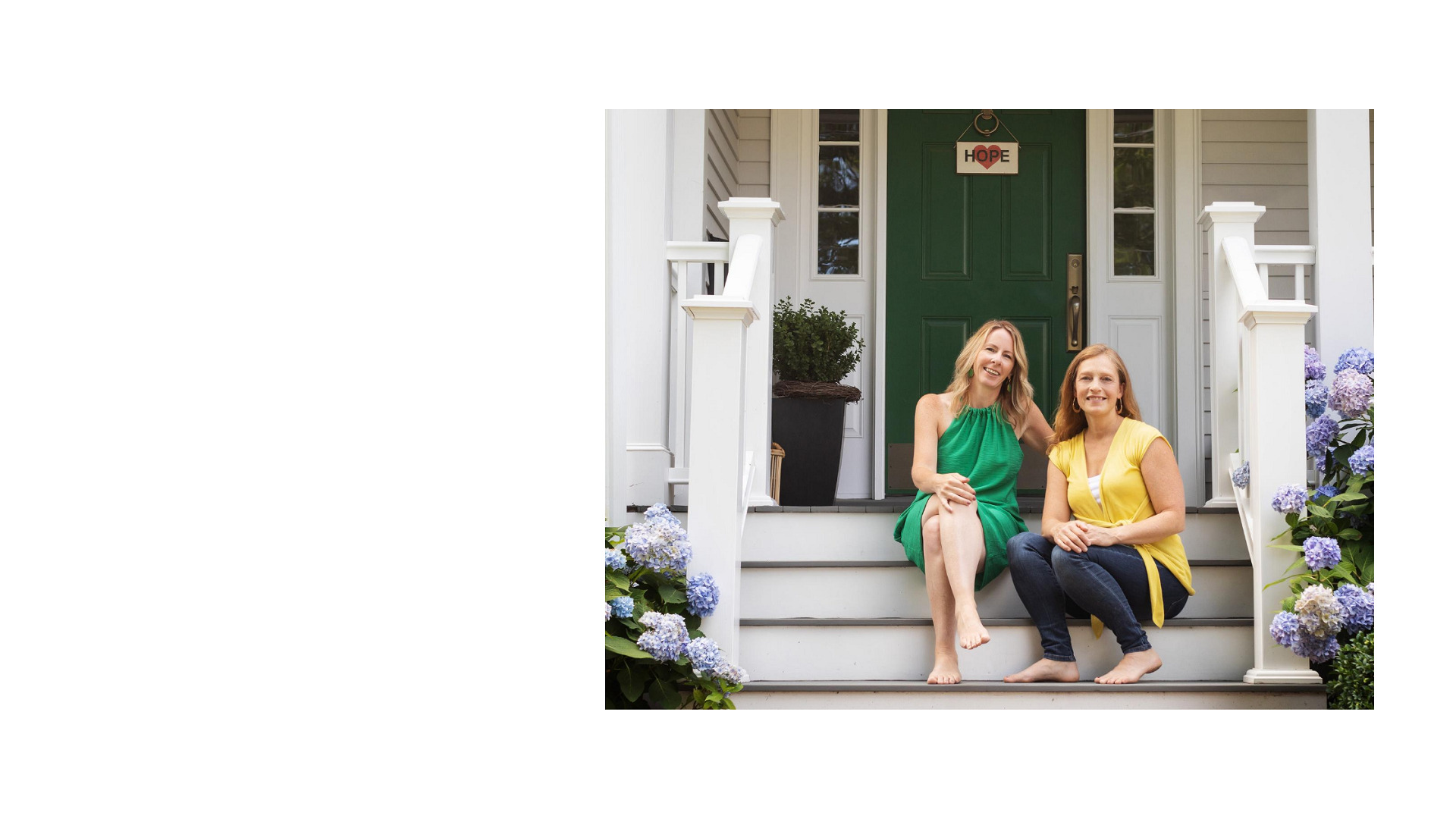 In early March of 2020, during the onset of the Corona Virus global pandemic, photographer Cara Soulia and marketing consultant Kristen Collins decided to donate their time to raise funds — through family portraits – for their local food pantry. The scope and eventual outcome of their project was entirely unknown, but the duo decided to pool their talents, as well as those of several colleagues, by starting The Front Steps Project, a photographic study of families on their front steps in exchange for a donation to the Needham Massachusetts Community Council. Unbeknownst to Cara and Kristen, their project was about to land in a major way.

Within weeks, The Front Steps Project in Needham would document over 800 families and raise nearly $50,000. But this was only the beginning.  Photographers around the globe, inspired by Cara’s efforts and looking for ways to give back in their communities, began their own version of the project. By June 10th over 500 photographers had raised over two million dollars for local food pantries, hospitals, animal shelters, local businesses, and more.

Dan Milnor caught up with Cara and Kirsten to find out more about the pair behind this amazing project.

First off, congratulations. As we find ourselves in a challenging societal situation you found a way to make an impact, not only by collectively documenting a version of our situation, but you also found a way to contribute at a high-level through a spirit of philanthropy that recently passed the $1.950 million mark. Not too shabby. But let’s go back to the beginning and take a look at how it all began. I think many of us have specific days in early March etched into our calendars for a reason unlike any other in our lifetime. March 18th was the day Cara posted the first Front Steps Project image, but how long was it between the first conversation and that first photograph being posted? Did you have any initial expectations? And how quickly did those expectations become realized or surpassed?

Even we have had to go back and try and remember exactly what happened each day that followed March 12, the day our town canceled school. Kristen had the idea to photograph families that weekend (March 14-15) and then the two of us discussed/researched details (such as hashtag availability, using GoFundMe etc.) on March 16. Cara took the first images of her family and a few others on March 17. Kristen wrote the first post and we set up the GoFundMe during the 16-17th. The first post was on March 18 on Cara’s IG handle and FB handle (under her photography business).

We knew we’d have interest in Needham. If nothing else, we have friends in town and our kids have friends. People love the Needham Community Council. Did we think: We might have too much demand. We might be flooded with requests. No. We didn’t overthink it from that perspective.

The early days of the pandemic were uniquely challenging as there were so many unknowns. Was there any pushback from families or colleagues or were people on board from the word go?

The experience in Needham was really positive. Hundreds of local families signed up, photographer friends offered to help (thank goodness!), media started calling and photographers from other communities reached out asking to replicate the idea. Having our peers respond and support the idea so positively shows how passionate and caring members of the photography community can be.

And, in response, it was easy to choose to offer the idea (and How-To) to anyone who was willing to pursue the philanthropic spirit of TFSP. Our goal was to use our skills to unite our community and raise vital funds. We really appreciated that one of our Needham photographers is married to a physician at one of Boston’s top hospitals. She, along with the head of the Select Board in Needham, helped guide us during the early weeks, through our pause, and when we resumed the project in May.

The donations were intended for the Needham Community Council. How did you decide on that and what was the reaction from the council?

It was pretty simple to choose the NCC as the recipient for our local TFSP because they are so well-known and influential in Needham. We recognized that it was important to choose an organization that everyone knew and valued, thereby letting everyone who participated feel good about their donation. The NCC was amazed, grateful, and really fantastic to work with throughout the whole process. We feel lucky to have gotten to know them even better!

You made a decision early on to donate your time as the creatives behind the project. Was that a difficult decision? And why go this route?

Not at all. It seems obvious to us that, in a time of crisis, people who can *need* to find a way to help others. That can be done in so many ways. The Front Steps Project was our way.

We think the real testament to selflessness is the hundreds of photographers who also did #TheFrontStepsProject for philanthropy.

This is what keeps us going: The community of people who gave time. We want to celebrate and support their decency and goodness.

How quickly did the greater, international community begin to engage with the idea you put forth? And was there one identifiable reason so many photographers wanted to copy or become part of your efforts?

It took a couple of weeks for the TFSP to go international, but it was really successful in Canada early on. Just like in the U.S., the photographers received media coverage so the idea took off quickly. Ultimately it also spread to the UK, Ireland, New Zealand, Australia, and more.

Many photographers told us that they were feeling the same paralysis that we ALL felt (everyone, not just photographers). Our regular day-to-day routines, jobs, and homes were shifting rapidly. Like overnight. Normal was over. ‘What do I do now?’ was a universal theme. Many of the photographers who did TFSP wrote to us and thanked us for giving them the answer: I can use my skills to volunteer, connect with others (from afar), spread some joy and “normalcy”, and raise funds. TFSP gave people a purpose, whether it was the photographer or the home waiting to have their image taken. MANY people told us they were happy just to have a reason to shower.

We live in the Digital Age, so anytime we see people make the commitment to print it makes us all very happy, but why was this such an important part of the project?

Every photographer who participated in The Front Steps Project deserves to be really proud. In a time of crisis, he/she/they decided to volunteer — just like those who helped at food pantries, delivered items to neighbors, or shopped for the elderly — for their community. They donated time, talent, and skills and raised a boatload of money for organizations that desperately need it. They rallied communities and gave people brief moments of normalcy and joy.

Putting the images of TFSP into print creates a permanent, visually beautiful memory of that generosity. The book, at a minimum, represents a personal accomplishment of selflessness. It’s a moment of a person’s history to pass to his/her/their family.

But, even more, it can be an opportunity to rally the community again. We’d love TFSP photographers to create community-based books of their images and their local stories. Sell it to community members and donate the profits. Place them in restaurants. Sell them in local retail and home stores. Donate one to the town hall and library. Maybe even print, frame, and hang some historical images in community halls and public locations.

TFSP, while certainly a casual endeavor, has a place in history. Images don’t have to be perfect documentary-like items. Give them a permanent life so everyone can remember the moments of decency that erupted despite the crisis.

How did you land on Blurb and was there anything specific about the platform that seemed to connect to the project?

Cara Soulia, the photographer who launched TFSP, uses Blurb for her personal family books and felt it was accessible for everyone. Our goal in asking Blurb to partner with TFSP was to ensure that every photographer – regardless of experience or location – had the option to create, market, and sell their own TFSP book.

We wish we had a budget to hire some people to help us when things were really busy with the local growth. Cara and I worked 24/7 for over four months just to keep up.

In terms of what we wish we knew, the question is actually maybe best answered by what we discovered. Communities are different. What we assumed, communicated, and achieved in our Boston suburb was different than a town 15 miles away. And very different than a small community in the Midwest. And even more different than the fantastic crew in Louisiana. Canada had its own massive mission and vibe. And have we mentioned the amazing success and positivity in New Zealand?

By realizing that we all had the common goal of using skills and talent to help others, we were able to say: Go for it. Every single photographer ran their own TFSP and we’re so amazed at all the different ways they found success. We have learned more from them than we ever imagined.

What is next for you both?

We are working on two books! The Needham TFSP team is designing our own Needham book using Blurb. And we’re working with West Margin Press to publish a book that represents the fantastic themes, people, and images we witnessed during the intense first 12 weeks of the COVID crisis. Both books should be done this Fall.

Personally, Cara is back to work photographing newborns and families in Boston. Kristen is back to work helping small business owners and non-profits with their growth and communications plans. Most importantly, we’re keeping our own families together, connected, and motivated during this next wave of the COVID era.