Home » Self-Publishing » The Future is Written. And Illustrated Too. 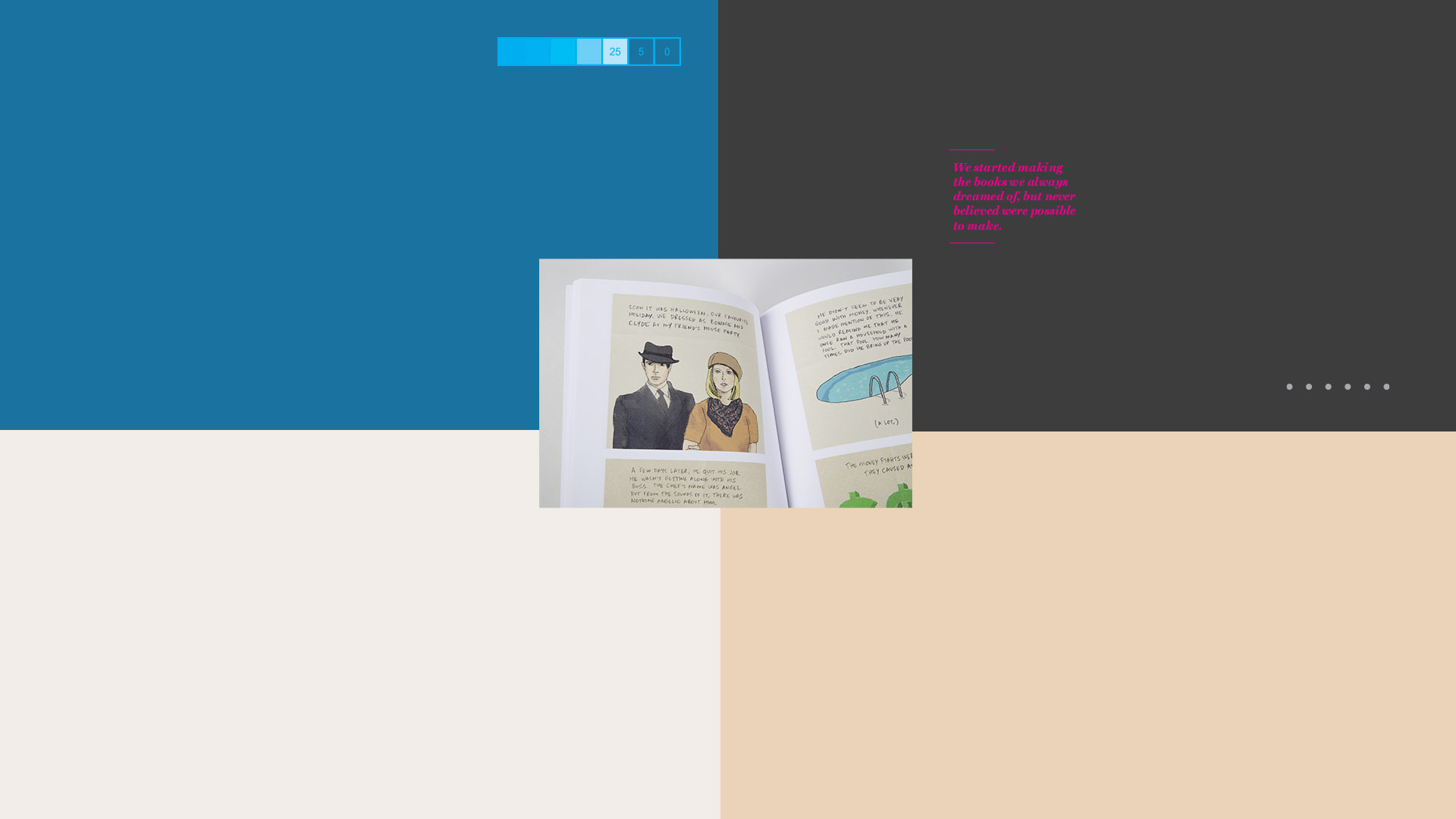 The Future is Written. And Illustrated Too.

Let’s set the stage: It’s the inaugural London Author Fair, and 200 self-publishing authors and professionals are crowded into the swanky Hospital Club. On stage are five of the industry’s prime movers and shakers: Gareth Howard of Authoright, Patrick Brown of Goodreads, journalist Porter Anderson, literary agent Piers Blofeld, and, of course, Eileen Gittins, CEO of Blurb. The question before them: What is your prediction for self-publishing in 2020?

There are the usual pronouncements: Reading will be more social, there will be many more authors (and readers), we won’t talk about “self-publishing.” Then Eileen makes her pronouncement and the audience resounds with a collective “oooh.”

“Images are the new lingua franca… in 2020 all books will be illustrated.”

It’s a bold statement, to be sure. After all, this room is mostly full of writers. Subjects, predicates, adjectives—these are the elements with which writers create their books. Yet you can tell from looking at the faces in the room that something’s been unlocked, a seed has been planted.*

To the Blurb faithful in attendance (myself included), Gittins’ statement isn’t a surprise. And it certainly isn’t a surprise to those authors who have been browsing the bookshelves in the Blurb Indie Author Café just outside. Alongside the more traditional offerings of novels and poetry books are children’s books, travel guides, graphic novels, photo narratives, comic books, cook books, magazines, and books that defy categorization. Whether led by words or images, each of these books is first and foremost a story—a story that can’t be told any other way.

As writers guzzle their artisan double-ristretto cappuccinos, they tell us about their novels—most, after all, are here for those. But then, after a few sips, they talk about that other project they’ve been thinking about or working on but don’t know how to start: A children’s book, a travel book, a piece of photojournalism. And they leave thinking that their next book might be of the illustrated kind.

Back to the future

Eileen’s vision could just as well have been about the history of books as it was about the future of them. Before Guttenberg came along and created his moveable type, the line between written and illustrated was much fuzzier. European monks of the 13th and 14th centuries created elaborate Bibles with serpentine drop caps intertwining with often-phantasmagorical biblical scenes. Marginalia abounded. Books were beautiful inside and out. Given most of the population was illiterate and their access to these books—in an age before mechanical reproduction—would have been limited, illustrated storytelling was critically important. And this was illustrated storytelling par excellence. These monks—and their patrons—knew that to put forth a really killer story, you had to both tell and show. Going back even further—to the caves of Lascaux, for instance—and storytelling was exclusively of the illustrated variety.

Serious literature has largely eschewed the image, relegating “picture books” to the stuff you find in the kids section or comic book store. Lynd Ward, whose novels were entirely composed of woodcuts, is an exception. And while mavericks like Kenneth Patchen would freely combine painting with poetry in lavish limited edition art books, these books never came close to the bestseller list (though they command high prices today). During the last twenty years, the line between serious literature and comic books has blurred. Neil Gaiman’s The Sandman found its way onto the New York Times bestseller list. Comics became legit lit and suddenly, illustrated stories were taken seriously again. Literary quarterly McSweeney’s brought beauty back to the literary magazine with illustrations and ephemera. And that lineage can be traced up to J.J. Abrams’s richly illustrated marginalia-fest S.

But for all this fancy talk of medieval scribes and comic writers, the real key to why illustrated books are making a resurgence might be something more immediate: The Internet and our resoundingly visual culture. Or, as Eileen said, “we have all come to expect to see images and graphics in our daily lives. It’s how we communicate.”

Illustrating outside the book

Three months later, a different stage on a different continent: Blurb, along with UK Design film Jotta, are wrapping up the third in a series of exclusive events called (collectively) “Unbinding the Book.” The previous stops have been in London and New York. Now we’re in San Francisco, Blurb’s hometown.

In Dog Patch Studios, four speakers take the stage to talk about “the book as art object,” a concept that goes way back—back to the monks discussed above, in fact. Ala Ebtekar, the evening’s third speaker, makes art utilizing that tradition, modifying Persian prayer books with his own illustrations to tell new stories, including the horrifying true tale of how the Iranian government used children to find land mines during the Iraq/Iran War. Gallery owner Donna Seager shows examples of book-based sculptures she’s displayed at the Seager Gray Gallery in Mill Valley, including books cut in ribbons to resemble tree moss. Book artist Vince Koloski brings some of his book creations to share with the crowd: Etched, lighted, hinged plexi-glass affairs.

The session is opened, however, by Andrew Losowsky, author ofFully Booked, one of the best books ever written about books. He starts with a reading from the book’s ironic preface:

“Let me state this for the record: The Internet is not dead. Digital will not disappear. Print will not kill the web. It’s easy to forget that when physical books were invented, news websites ignored them, and then laughed at them as a niche pursuit for geeks…”

It’s a wry and playful revision of the commonly expressed notion that books—real, physical books—are dying in the face of digital. It’s a notion that no one in the assembled crowd believes. Many, after all, have arrived carrying their own book projects made in a variety of ways: Offset, print on demand, letterpress, darkroom, and home printer. These people are here because they believe in books as art objects.

Blurb has brought along roughly 25 books, a far cry from previous events at which we’ve stocked the display shelves with hundreds of titles. Tonight’s books break the format in some way: Arthur Tress’sBarcelona Unfolds is a Blurb Standard Landscape photo book where each page has been folded in half so that the pages are nested in on themselves. Paula McCartney’s A Field Guide to Snow and Iceis a Large Landscape book with the pages cut vertically to reveal portions of the pages underneath. Universe War, by Guy Benjamin Berkshire, is a comic book composed entirely of cutout imagery. Dan Milnor’s On Approach is a special edition photography book housed in an intricately made wooden box and packaged with its own ephemera.

These books are proof that the Internet hasn’t killed the printed book at all. In many ways, it’s brought it back to life. It’s made the one-of-a-kind book possible and affordable, open to anyone with a computer and an Internet connection. It’s a far cry from the gilt-bound tomes made by monks for wealthy patrons.

The books assembled here are more than just illustrated books—they’re illustrations and expansions of the idea of what a book can be. They are—truly and sometimes literally—books unbound.

As shrimp skewers and wine are consumed, people talk about their projects. I’m thinking of London and Eileen’s statement. It was hyperbole, right? Maybe. Or maybe not. Eileen is fond of saying that even back in 2007 she was thinking of ebook, self-publishing, and, well, the future we find ourselves in now. So is it entirely impossible that 13 years after she came up with the idea of Blurb that publishing will make another transformation? A seismic shift to a world where most, if not all, books will be illustrated? I wouldn’t bet against it.