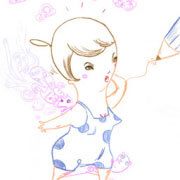 Graduated from the École nationale supérieure des Arts Décoratifs (ENSAD) in Paris in 2004, she directed there her first short film «Tango on Saw ». Since Caroline Attia has been navigating between animation and illustration.

Among her many films, «End Gn Violence» was nominated for an Annie Award in 2008 for best TV commercial, «Elevator Operator» won the Best Music Video Award at the Istanbul Animation Festival in 2012, and «Pinchaque, the Colombian Tapir» won Best Animation Award at Festiver (Colombia) in 2011 as well as a Special Mention at the Expotoons International Animation Festival (Argentina) in 2011. Caroline is currently working as a development artist and animation filmmaker on several projects. Among them the TV series « Casimilo and the legends of the new world» produced by Sacrebleu Production which received many supports ( Unesco France, CNC, Orange, Media, Annecy, région Lorraine, Région PACA, Procirep - Angoa) as wall as «Bottled Pirates» a transmedia project also produced by Sacrebleu production recently got grants from the French Film fund ( CNC ) and the French society of authors ( SACD ).

She has been working at the same time as en illustrator for client and magazines such as ELLE, the New York Times, Harvard Magazine, Pictoplasma, Prisma presse, Thomas Nelson…