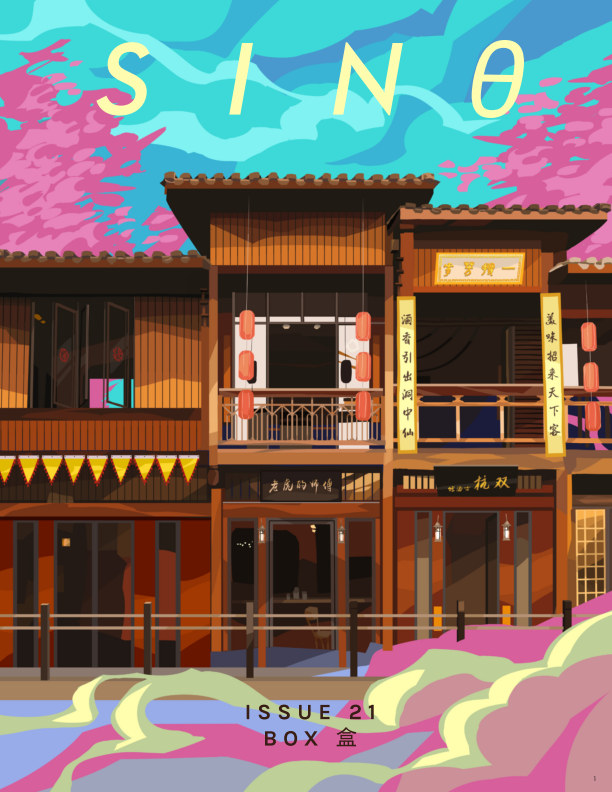 A box closes its mouth to become itself. No one knows its purpose—if it intends to keep its contents inside, to block that which is outside, or intends only to delineate space. What we can say is our satisfaction with the box comes out of its changing form, in the creaking of hinges as its jaw widens, or that satisfying click when it bites down. sinθ #21 “BOX 盒” finds works which play with the rules of enclosure; works which, once unpacked, suggest the joyful pleasure of connection between oneself and those which surround us.

In this issue:
Juliette Wu adorns our front cover with a hallucinatory, wuxia-inspired illustration; Fidelia Jakin bookends this issue with the fantastical “Chrysalis”
Yang Gao’s presents intimate digital illustrations, carrying the nostalgia of text-box art from the early 2000s
Editor-in-chief Jiaqi Kang interviews illustrator and animator Pearl Low, discussing the shift towards making work for children, learning Cantonese, and art as a means of serving community
Runner up of sinθ’s 2021 Summer Writing Contest, Huiru May Huang presents “The Apartment”, a short story on the intimacy of sharing space with a near-stranger
Editor Laetitia Keok interviews Chinese-American poet Jenny Qi, speaking about her debut collection Focal Point, and her journey from biology to writing
Poems by K.J Li, Amy Wang and Eric K. Ku, which think about the permeability of containers, physical and spiritual
Web intern Enling Liao interviews poet and art history student Donnalyn Xu for our student spotlight. They talk through the ampersand, and Xu’s relationship with art.
Short stories by Angelica Chong, Q. Y. Tie and Catherine Xie, on the possibilities of exchanging memory, both personal and historical.
Poems by Andrew Kang, Cheng Tim Tim and Ethan Luk, which investigate enclosed spaces, whether in the space of the home, contraband, or a lyric
Rachel Loh’s “Where do we go when we dream?”, a photography series exploring the kinds of realities we inhabit in our sleep
Author website
https://sinetheta.net/

sinθ is an international print-based creative arts magazine made by and for the sino diaspora. submissions guidelines: sinetheta.net/guidelines