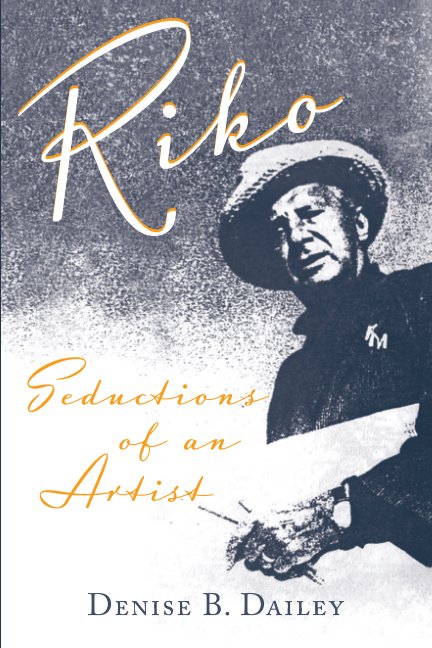 Riko: Seductions of an Artist

by Denise B. Dailey

This book may be found in online bookstores, like Amazon.com, using the ISBNs below:
Softcover ISBN:
9780999406915

Paperback edition. A biography of a Czech artist educated in the 1920s and `30s in the most artistically revolutionary capitals of the world: Vienna, Berlin, Prague, Paris, who gets caught in the Nazi dragnet through his marriage to a Czech Jew. The story follows their double exiles, first to war-time England, and then to the United States, where they delight and despair over re-establishing Riko as a first-class artist in the radically evolving cultural decades from the `50s to the `80s.

"Not only does Dailey bring vividly to life two endlessly fascinating main characters, but, in addition, she brings alive the whole panorama of European history almost from the First World War until a daring visit she herself makes to the Eastern bloc in pursuit of her protagonists' early story, an adventure that she presents with bone-chilling vividness. Amid so much devastation, dislocation, and privation, there was so much artistic ferment. In these pages, which introduce us to a Czech-born painter who should be better known--and would be, did he not keep sabotaging himself--are Kafka, Kokoschka, and Leger, miraculously creating their masterworks, while the world keeps crumbling around them. The writing is controlled, informed, and capable of images of hallucinatory intensity. It succeeds in persuading us that Dailey's painter friend, J, E. Milkeska, was a painter--as well as a character--to be reckoned with." *** "A highly sensitive and insightful book. The character portrayal of both Greta and Riko is right on (I knew them both). The book brings out both their strengths and frustrations. Bravo to an outstanding piece of literature."
Author website
http://denisebdailey.com

Of Brazilian-Chilean-French origins, fluent in four languages, and a traveler to the seven continents with her husband and children, Denise B. Dailey adapts easily to international subjects. Her ability to listen to people in multiple languages, and her passion to share their stories, inform and propel most of her writing, from short stories to travel journals, the most recent being 'Listening to Pakistan' (available on Amazon). Denise has a B.Sc. from McGill and an MFA from Columbia Universities. She has taught English as a Second Language at UN schools and in the School of General Studies at Columbia University.